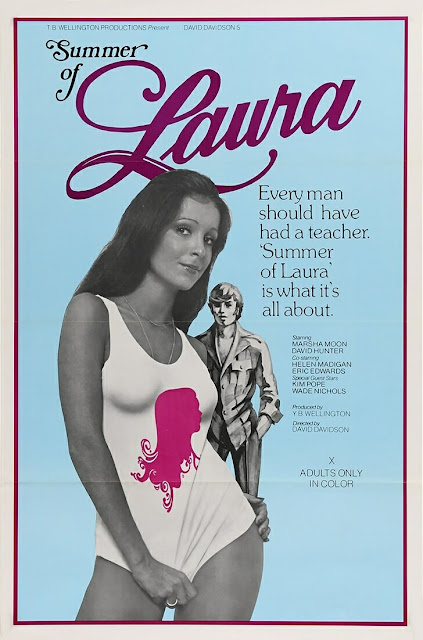 Nobody can accuse David Davidson of flooding the market with his productions since he did only three movies.I have seen one previously (Call Me Angel, Sir) but I don't remember much about it and I have never seen The Devil and Mr. Jones.

This film shoot at Fire Island is about the sexual awakening of two teenagers, Gene (Eric Edwards) and Ritchie (David Hunter) during their summer vacation. The film start with them getting their first glimpse of sexual activity when peeping on a couple living on the island (Marsha Moon and Wade Nichols) and from them we follow their summer days experimentation.


For some reasons this one isn't well known and the critics aren't that good, our "favorite" reviewer by example missing the point as usual when he whine about the look of Marsha Moon. See she is suppose to be an average looking woman since she represent the phantasm of the forbidden older woman that every teenagers have. Of course neither Edwards or Hunter are teenagers but they look young enough to pass for young twenty something man.
To be honest the film is more enjoyable because of its visual and the way it is edited than the action on the screen, the dreamlike sequence when Gene reads the book is a great example of what I say. So I can understand why this film wasn't a success (going from the low rating and the short career resume of Davidson as a director) since it's more an "experimental art house" film than a "sex film".

Ritchie resume the story better than I can do at the end: "That summer we lost five Frisbees, saved a girl from a silly snake, saw our first skin flick, and I lost my Laura."

Did I enjoy it? In a way yes since it made me think at Last Summer with some adults present, but as I said this isn't your typical adult movie.