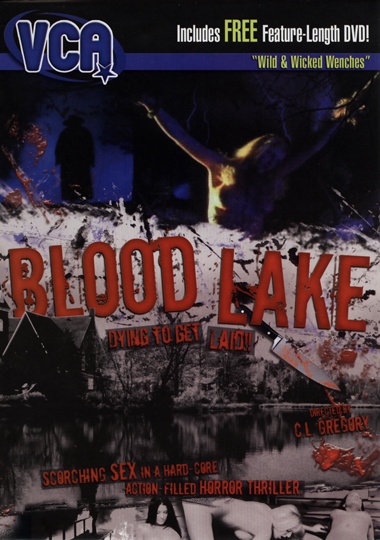 A group of friends spend a weekend at a remote lake location, at some point one of the girls finds an old book in the main cabin. The book is a blood book and after reading an incantation from its page the ghost of a priest will wake up to exact his revenge because of something... seriously there aren't much to say story wise.

This regional production shot in Kentucky state is nothing to call home about, it's amateur hour at its worst. The story is really lacking details and the action is quite repetitive, by action I mean the sex who is badly shot, badly edited, dubbed (at least I hope because even Lucie Wilde performances were more convincing than what we hear here), always in the same fricking bed and, to make thing better, the guys can't perform (except for Dick Chibbles).

The sad thing is that a good film could have been made with that story line with just some efforts and talents from the crew team.
Don't waste your time, the film is bad and not in a good way... the only reason to watch this if you want one is that it was the first real full length feature of Dick Chibbles and India Summer.
To be honest the chapter that Dick Chibbles wrote in his memoirs about the behind the scene of the filming weekend is way more interesting and enjoyable than the 80 minutes spent watching this in front of your TV.
Posted by Jimmy at 10:43 PM No comments:

Just Let Me Help You!! 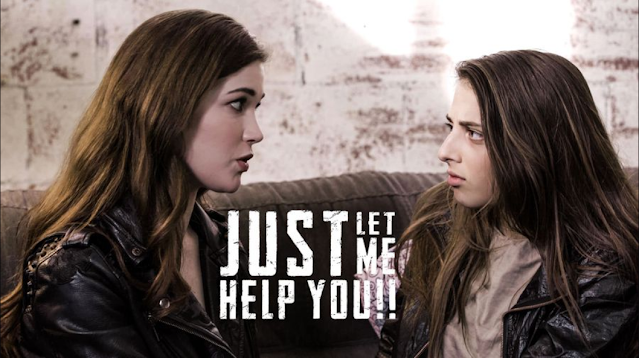 Megan (Gia Derza) and Aliyah (Evelyn Claire) are two good friends living in the streets the best they can. Aliyah is the strongest one and she is responsible of taking care of her more unstable friend.

Everything goes fine, as fine as being homeless can be, until Aliyah doesn't return to meet Megan at the end of a day. The single day of absence become two weeks and Megan panic more and more, she spent the time searching every shelters with no luck and she finally resort to go talk with Judy (London River) a social worker.

The meeting turns to be a waste of time since all Judy wants to talk about is Megan case and ignore every reference to Aliyah. The best she can do is to find a place for Megan for the night since the temperature will go below zero that night... She goes at the place and a surprise happen later when Aliyah shows off all cleaned up with new clothes and make-up.

It's time to learn what happened to Aliyah during those two weeks... she found a sugar mommy to take care of her which beats living in the streets for sure. She wants Megan to come with her, but since she isn't a lesbian she isn't very enthusiast. Aliyah is ready to go when Megan accepts to give it a try and Aliyah will teach her.

You know already that I prefer lesbian scenes and that I love Evelyn Claire, so it's a given that I have enjoyed this one a lot. Feels more like Girlsway than Taboo to be honest, but who cares? Honestly the main scenario of two young girls living in the streets is great, in fact that could have been easily an Adult Time full length feature even if that could have been a little bit depressing. As usual Evelyn Claire is awesome in her role and Gia Derza is good too... she sure sells her panic mode well. Also big kudos to the actresses who went make-up less or at least a discreet one. London River did well in her non-sex part of the mysterious social worker. Nothing to complain about this short feature... it's well shot, well written and the sex was hot with the actresses staying in character. The feature ends with an obvious "a sequel is needed" conclusion and I really hope that one will be done.

As usual this is exclusive to the Adult Time / Pure Taboo streaming service at the time of my writing... 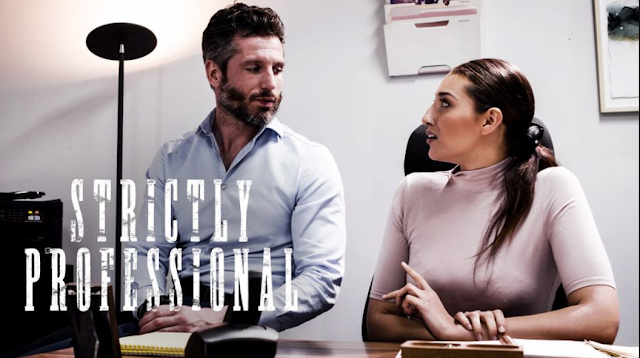 Another week done so it's time for a new Pure Taboo web scene directed by David Lord this time...

Ashley (Bella Rolland) is doing her secretary works when her boss (Mike Mancini) enter the room and, to no one surprise, starts a charm routine with his secretary. But she doesn't fall for it, she won't have sex with her boss and even less a married one.

Things could stop here but that wouldn't do a very good story right... So the following days she can't stop thinking about David but the problem is always the same, he is a married man. She decides to follow his wife (Goldie Glock) to find a justification to the relation with the boss.

She catch the wife in her teaching class and they start talking, but no much dirt to find there since she gives a course to help women to become CEO. They leave the class and Ashley follows her in a coffee shop... yep the same one from Gray Area and No Regrets. This is where she will gets the justification needed when Megan takes money from a wallet she picks before returning it to his rightful owner (Shawn Alff).

With this new knowledge that David's wife isn't a perfect angel Ashley returns at work. This time the roles are reversed since she's the one who will do the move on the boss and he certainly won't refuse the advance.

What follows is a hot scene in which Ashley is the one in command, ending with a deception for her... but seriously what did she thought would happen?

This one was much better than the two previous scenes directed by David Lord I have reviewed. It doesn't go the way those story line usually goes, at least not from the start. You have a conflicted character and a not too shitty boss after the rejection of his sexual advance. Obviously the selling point of the scene for me is Bella Rolland, one of the few tall woman in the industry... she can act, her legs are awesome, her feet are to die for (sadly we don't see them here) and she would be the perfect choice to play Wonder Woman. Mike Mancini plays his part well too, but I wasn't impress by the sexual part (everybody can have a bad day). Obviously the camera works by David Lord and Sal Genoa is faultless since they are veteran. I put my recommended sticker on the scene even if some could complain about the lack of taboo, but sexual harassment at work sound taboo enough for me and, to be honest, do we really need a thousandths step family scene? 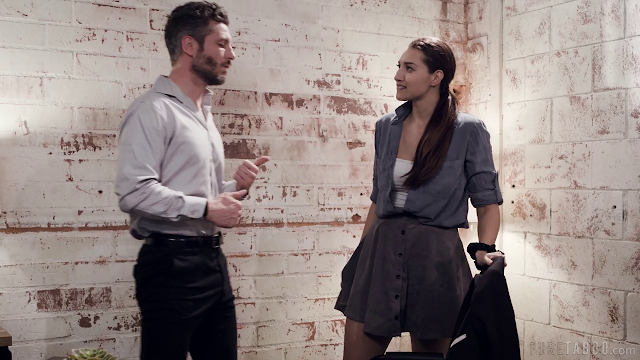 You know the drill already... the scene is available exclusively on the Adult Time / Pure Taboo streaming service at this time since it was released today... 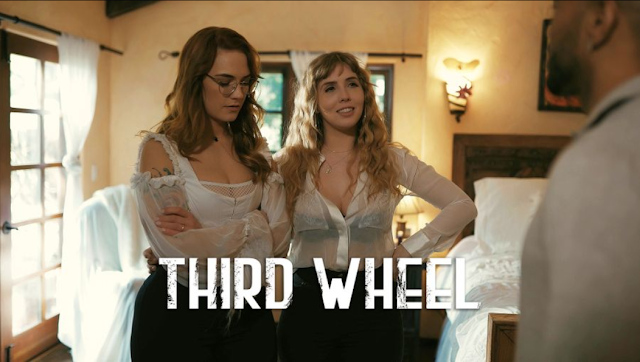 Elizabeth (Siri Dahl) and Terri (Lena Paul) are a married couple who try to start a family but all their previous attempts failed and they don't have the money anymore for another artificial insemination procedure. So they decide to go for the real thing and Terri convinces Jordan (Troy Francisco) an old friend of her to work his magic on her wife.

Elizabeth who have never been with a man in her life is far from being comfortable with the idea of having a sexual relation with a guy to become pregnant (to be honest I sure can see why) and she have a mental breakdown before anything start.

Terri quickly goes to talk with Elizabeth in the next room to say that she will stay with them to help and take care of her. She's reassured and goes with the plan without much enthusiasm, but they want a baby so there aren't much choices.

The process starts and Terri takes care of Elizabeth as she said she will, but after a while she became more and more involved in the actions... starting with oral sex on Jordan and she will take complete penetration even if she isn't the one who will carry the kid. Nothing will goes as expected... 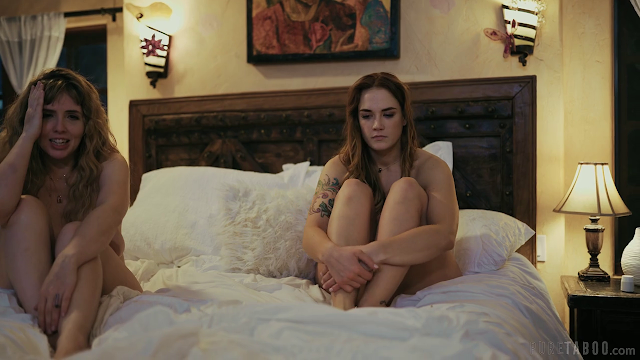 Some could disagree but I think this one fit perfectly with the taboo nature of the label, you have a gay married couple who wants a kid but doesn't have any other choices than going over the fear of the opposite sex (at least for Elizabeth the would be mother). Siri is great in this feature, always staying in character and it's clear that she gets no pleasure from this at all and I felt sad for her when the movie ended. Too bad she doesn't get more acting part because she is a good actress. Lena Paul isn't bad too in her manipulating partner role and Troy Francisco doesn't have much chances to shine acting wise since he doesn't much to do. As usual with the Pure Taboo the end is open ended and I sure hope that Elizabeth wise up and wake up to what happened in the unseen conclusion...  I recommend this one.

As usual it's exclusive on the Pure Taboo / Adult Time streaming service at the time of my review. 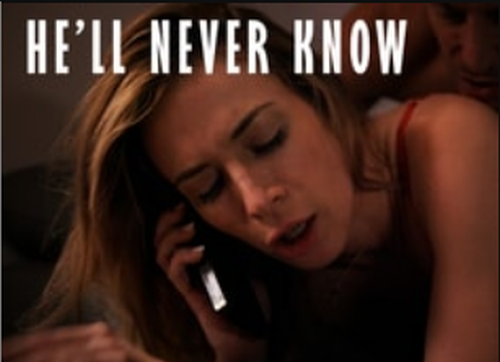 We start the feature with two nurses, Evangeline (Aiden Ashley) and Victoria (Judy Jolie), on their lunch break talking about guys. Evangeline is married with a kid and live a quiet life with her family, on the hand Victoria who is separated from her husband is in a totally different situation.

At some point during the conversation Evangeline bring a shocker... she's talking with a guy on a dating app and plans to meet him, seriously considering how she reacted previously this wasn't expected. Victoria warn her friend that she could suffer big consequences if she decide to cheat her husband with that man, but Evangeline decide to go with her plan as she say "What he doesn't know won't hurt him". 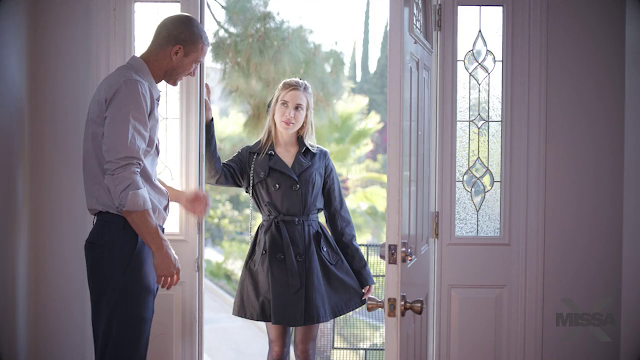 The first thing she does when she arrives at the house of her date is to go to the bathroom to call her husband telling him that she is at the gym and will be late. From there you know what's coming... but we get an husband calls bonuses and we end with a maybe he knows or maybe he doesn't ending (to be honest I'd let that one time adventure slip if I was her husband and play the I don't know game). 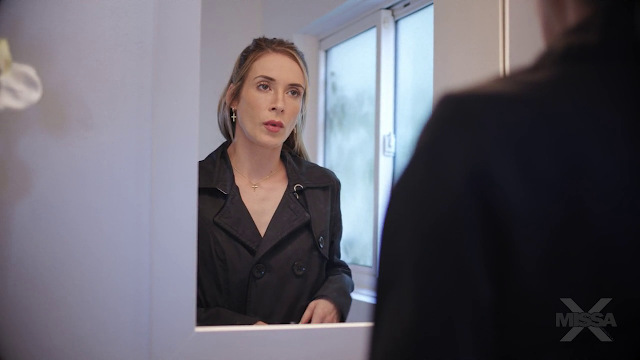 Not necessary a must buy for most viewers... but if you like Aiden Ashley as much as I do this is a different story. She's the best actress currently in the industry and if she is in an acting role I must watch, no question ask.

This is exclusive on the MissaX streaming service so you can stream the film if you are a member and if not you can buy it directly from them. Sure worth the money for me...