I've keep this one secret since it isn't fun when we talk about something and that doesn't happen. In fact only one of my reader knew it before the announce. So here we go : I'm a writer on the new DistribPix portal, so from now on my reviews of the Video-X-Pix materials will be posted there.
Of course my blog is always alive since I will continue to review the rest of what I watch here. I'll try to watch something later this week and untill then my review of The Postgraduate Course in Sexual Love is available.
Posted by Jimmy at 7:38 AM 3 comments: 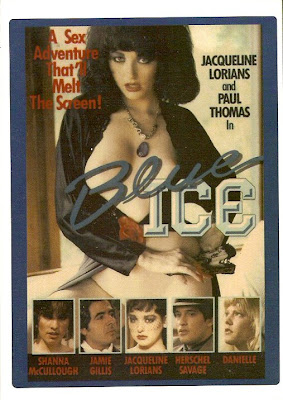 What's best for my comeback than a detective story featuring Nazi scientists, a mysterious old book and all this in a high-quality film. This film directed by Phillip Marshak (who also did The Nightmare Never Ends, an horror  movie much better than it's reputation could make you believe it is) has a pretty strong cast with Herschel Savage, Paul Thomas, Jamie Gillis, Helga Sven (for once I enjoyed her presence), Jacqueline Lorians, Shanna McCullough, Bill Margold, Danielle Martin and Francois Papillon (which has not a single line since his french accent is quite hard to impersonate a German accent) among others.
Ted Singer (Herschel Savage) is a detective hired by Big Man (Jamie Gillis) to find an ancient book with strong powers for its owner, something he doesn't know of course. What he doesn't know also is that a group of scientists who fled Nazi Germany when the nazi power collapsed is looking for this book too, but they know what is its power. Surprise, the leader of this group of scientists is Reggie Nalder (a very recognizable character actor who was in Mark of the Devil, Salem's Lot and many other "mainstream" films). This group of scientists was working on a formula to instantly transform any woman  in nymphomaniac before fleeing Nazi Germany, a point that is never really explained or used if it is only in the beginning of the film. It is clear that more Singer approaches the book the more he is in a collision course with the Nazis with a series of deaths along his path.
For a film made in 1985 the quality is strong and one quickly sees that it was made with an interesting budget and was not done in one day with a video camera (which is the case for most of the movies made in those years). Even more interesting is the fact that it would be equally interesting and logical without the sex scenes that come all for good reasons and are not there to be there. The most interesting is that just yesterday I was explaining the difference between an adult film and a pornographic movie to someone (a situation that happens quite frequently when we write and vow a great respect for the adult film industry) and this film is a perfect example of what an adult film is and what a pornographic movie isn't.
I won't tell you more about the film, since it would ruined the story and its multiple surprises.
You can get this movie cheaply trough Adult DVD Marketplace.
Posted by Jimmy at 5:01 AM No comments:

Sorry for the lack of updates recently, a month is long enough. I was busy cataloging my collection of movie, a task I haven't completed yet. Not to mention the DVD player on my computer that has a hard time reading the disc for quite some time, something that made me lose my patience on multiple occasions last month. My patience has its limits so I decided to invest and got a blu-ray reader and watch my films on the big screen.

I'm back and I feel better than ever and I promise you that I will write at least two or three articles per week.

I will begin in a few moments with the movie I've watch tonight.
Posted by Jimmy at 3:21 AM No comments: