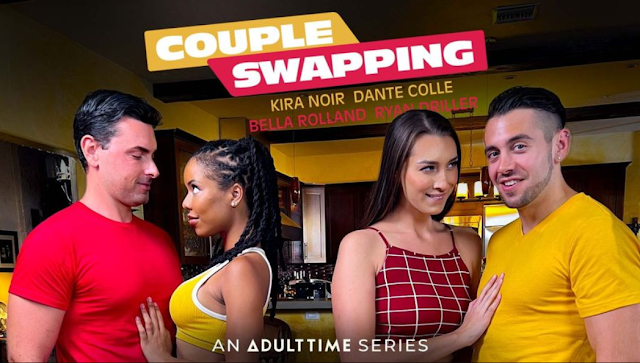 First episode of a new Adult Time series, the series should have straight and lesbian couple but to launch the show we get two straight couples. The title make it quite obvious what it is about...

Kira and Dante are at their home waiting for a yoga partner of Kira and her husband that Kira had invited for the evening. When they show up Kira jump in the kitchen to prepare the dinner, but it looks like they were a miscommunication problem.

Ryan and Bella aren't there to eat food, they came to eat something else. Since the other couple doesn't seem to understand it looks like they will have to go straight to the point as Bella say they came before they thought they wanted to fuck them. Dante and Kira are surprised but after a short hesitation what we expected is put in motion, the couple switch and the action is ready to start... obviously from there there aren't much to say.
It was a nice introduction to a new series that isn't exactly what I usually review since this isn't story driven, to be honest I was mostly interested because of the cast. On that side I can't complain... Bella Rolland was great as she always is what can I say I love when an actress does more than going through the motions, shows a high energy level and is in control. Kira Noir is always a welcome sign here she works a lot but rarely in the genre of cinema I review. Dante Colle is fine as always and Ryan Driller is, in my book, the most handsome man working in the industry. If we talk sex I must say that it was quite hot with a lot of back and forth contrary to what I expected since I thought it would be each couple being in their corner doing their their things alone.

I won't say that it is essential but if you are a fan of one or more of the cast members you will enjoy, in fact this is the type of series that depends of who is in the cast. Joanna Angel did a good directing job letting the performers enjoying themselves and have fun.

Obviously this is exclusive on the Adult Time streaming service, but I guess it will get a release on VOD when all the episodes would have been released on streaming. 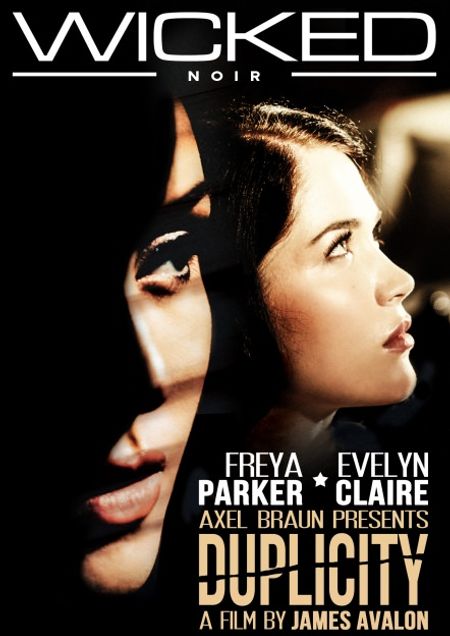 Already four years since my blog came back from the dead and if you'd told me back then that it would become completely about modern adult cinema I'd have laugh at you... little did I know. To start 2022 I've pick the first film produce under the new Wicked Pictures "noir" banner.

Miles Morgan (Charles Dera) break his adventure with his mistress Zeena just before his wedding with Molly who happens to be Zeena's best friend. The break-up isn't that amicable but she seems to get over it having a new relation with an older man. Some months later Miles got a disturbing phone call that his father was found dead and since the elder was a rich man the son is now a rich man.

To makes things even worse for Miles this is the time Zeena choose to show up at their door asking help, she must stay hidden for a while and Molly is more than happy to invite her to stay but Zeena have a plan set in her mind.

Usually I would continue with more details about the story but I can't with this film. Doing so would make a spoiling killjoy of me and ruining a mystery is the last thing I want to do... so you'll have to watch it to learn more.

This is a very good start for a new banner and I'm glad to see Wicked experimenting with something else than superhero and loops carrier, in fact that bring back memory of their glory days with the "passion" banner. Obviously the budget is limited as we see with the lack of outdoor sequences and the small cast but the set dressing and the way it was shot compensate greatly for this. Seriously the lightning for the film is amazing, Shaun Rivera created something so beautiful with all the shadows and the natural lights. Freya Parker who was new to me in A Very Sinful Christmas really impress me here by her acting, the film success rest on her shoulders and she completed the task without any difficulty. Evelyn Claire is a very good actress as we already know and she shines in a role who was mostly a non-sex part until the last act. Charles Dera is Charles Dera, he does a good job but the Father Karl personality shown up at time.

For the sex I have nothing negative to say, not one of them have a filler vibes as they are all important for the story and like she did for the acting part of her role Freya Parker shined in the sexual part of it. As mentioned earlier the way the scenes are lit bring a lot of eroticism to the actions and for me this is always a huge positive.

A very good choice to start a new year and an obvious recommendation, James Avalon is a veteran in the business going back to the eighties and this isn't a big surprise that a film in his hands would be a thing of beauty. At this time of my review this is exclusive on the Wicked Pictures streaming service but usually it doesn't take a very long time for their films to be available everywhere on VOD and DVD.