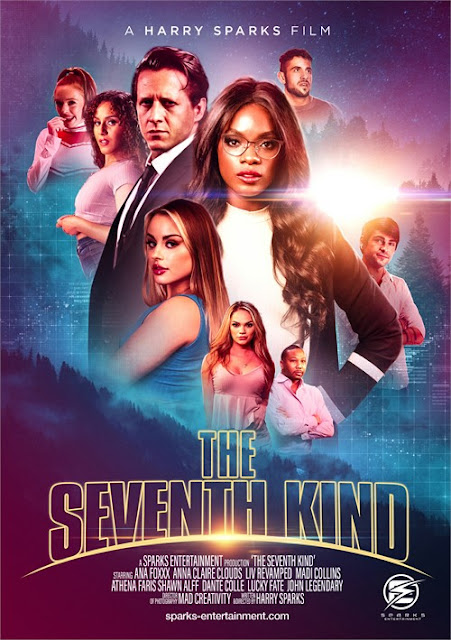 Harry Spark is back with another science fiction movie which is one of the genre neglected in modern adult cinema for some reasons. His previous one, Maid to Kill, was enjoyable and well done (not that surprising considering he studied cinema and made non X rated films before) so it was a given that I would purchase this movie when it would be available and now it is...

One evening while Rob (Dante Colle) waits for his wife Nicole to finish her bath to join him to watch a film the power goes out and everything starts shaking... Not only that but he disappears.

Fast forward one year later, Nicole (Ana Foxxx) who is a reporter haven't give up searching for her husband and everything seems to lead to an alien conspiracy. Sadly she is caught when she try to enter illegally in the Pentagon to get some documents to prove her claim. She is interrogated by a member of the federal secret service and they sure know a lot about her activities.

They know that she met Selina (Anna Claire Clouds) to decrypt a file that she got hacking a government server and that she met Amanda Price (Liv Revamped) a woman claiming that she was abducted by aliens when she vanished for months.

At the end of her interrogation the special agent makes an offer to Nicole, they won't charge her if she stop her investigation and sign a document confirming that she will. She isn't that interested to sign but they have more to threaten her... if she doesn't do so her friend Selina will be charge too for hacking top secret government's files, so she doesn't really have a choice. Flash forward six months later when Rob shows up at the door and explains what happen to him and how he comes back (obviously I have no intention to say anything).

As you can see I have kept almost everything unsaid in the story, I really think it's better to go blind watching and learned as the film goes with this one. As science fiction goes this was an enjoyable film and the script is interesting (the title isn't the seventh kind for no reasons). Ana Foxxx is very good in the lead role as are Anna Claire Clouds and Liv Revamped are, also that was nice to see Shawn Alff playing something else than a cuck or goofy character for a change. The special effects are obviously not on the same ground than multi-millions productions but they are certainly better than what we see, by example, in the film done by The Asylum. Some shooting decisions are interesting and different and the lightning choices for some scenes are quite good (by example when Ana takes her bath in the introduction). The other thing I like is that, just like with Maid to Kill, the sex scenes aren't overlong so it feels more natural... by the way great lesbian scene between Ana Foxxx and Anna Claire Clouds.

Another one to put in the recommended folder, you can watch it streaming only on the Sparks Entertainment website if you are a member if you aren't you can buy the film on video on demand where you usually buy your adult films. By the way I think a follow up should be made, I felt the story isn't over and I want to learn more about the conspiracy...

One of the biggest genre in exploitation cinema is the Women in Prison film, I have so many of them in my library, and this is is what Ricky Greenwood decided to cover with this new offering from AllHerLuv. Not that he never touched the genre before since he did Prison Heat back in 2019 for Sweetheart Video. Also if we are honest this is a film genre who is perfect for a more adult treatment.

Alexis (Alexis Tae) is brought to jail after her conviction for murder for the beginning of a long stay, it won't take long for her cellmate (Olive Glass) and her to become friend. She gives her all the vital information on who is who among the prisoners and who can and can't be trusted. We will also learn quickly learn that one individual in particular is dangerous... the jail warden (Ariel X), but if you are familiar with that type of cinema you already know that a warden is always someone that you must fear in jail.

When the lights go out the inmates can be more intimate, this is when Kenzie (Kenzie Taylor) and her cellmate and lover Alina (Alina Ali) decide to share their love... best sex scene in the film if you want my opinion. They aren't the only one who will see some actions that night since Alexis is brought in the warden office to get her welcome to jail treatment.

When Alexis is escorted back to her cell she is in shock after what happened and Olive does her best to console her. The following day she seems fine, but this isn't the more important event of that day since we learn that Olive being tired of being the warden's bitch plan an escape. Sadly for her someone will snitch and she will be send in isolation for a long time... at least Alexis and her will get the change to exchange their feelings for each other before.

When Olive returns from isolation something is broken in her and she isn't the same. But the focus of this episode isn't Olive or Alexis but Aubree who is certainly the most optimist of all the inmates since she know that she is innocent of the crime she is in jail for. Every time we saw her previously she was writing letters to her lawyer with the assistance of the principal guard (Helena Locke). This final night we learn why she "helped" her and the consequences will be deadly. But the film will end or not with the prison escape we were hoping for.

First thing first... the jail set designed by Kylie Ireland is amazing! The movie is enjoyable and is everything I expected for a Women in Prison film. The casting is solid beginning with Ariel X who was a great choice to play the warden (we sure feel the threat she represent for the inmates), Helena Locke plays her character in a way that we aren't sure almost until the end on what side she is and the rest of the cast did a good job too... obviously Kenzie was great but Alexis Tae, I have never seen before in a movie main role, was perfectly credible in her role, Olive Glass performance was also excellent... but my favorite actress performance even if she wasn't a major character was Aubree Valentine, the way she played it you believe in the innocence, the fragility and the emotions of this prisoner. Sexually speaking, if we forget that many scenes are forced sex, it was enjoyable (I have really appreciated the view from below used for some parts of the Kenzie Taylor and Alina Ali scene) and I must say that Ariel X really brought a vibe of danger and fear in the two scenes she had with an inmate.  I must say that I don't like the way the film ends but it's probably because some events don't seem clear (five minutes more to explain what happened after the jailbreak would have help I think) and, more important, the faith of Aubree wasn't deserved.

Without being perfect this was another excellent production from Greenwood and certainly worthy of a watch in my book.... at the time of my review the film is exclusive on the AllHerLuv streaming service in four episodes but since it's a major production it should be available quicker than usual for purchase online.