The Widespread Scandals of Lydia Lace (1983) 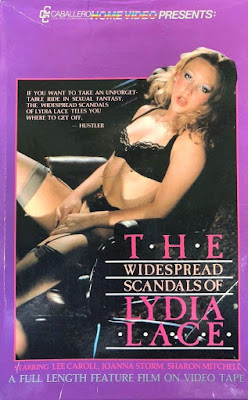 Duke, a lawyer, meet a woman (Joanna Storm) who wants to divorce her husband (Robert Kerman) because of his sexual perversion.

At the same time Jennifer (Lee Caroll) who is Duke's wife meet one of her client at her office. She is a psychiatrist and that client who happen to be the husband in the divorce cause talks about his problems with his wife perversion.

Duke takes the divorce case since he is scandalized by all that sexual perversion... which doesn't prevent him to have a mistress, Lydia, working as a sex performer at Show World.

So for his case Duke decide to go with his wife at a sex club to see by himself what happen there. They are in for a shock since there is sex shows, naked wrestling all in all what we expect in those bussinesses... but the big surprise will come later (no I won't spoiled it).

That was an enjoyable Henri Pachard production with a good cast of East Coast performers. In fact this is mostly a tale about the hypocrisy of the people always ready to condemn the sexual acts as perverted and disgusting in public (we sure know that kind of people) but do the same or worse in private.

Not on DVD but you should try to find it since it's a good exemple of what Pachard was able to do when he cared.