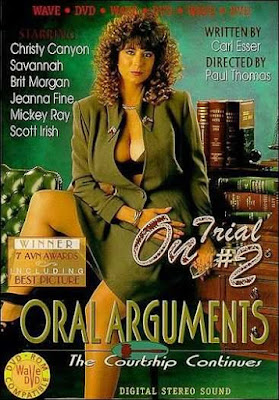 Not much to say about this part since it's more of the same... This time we get a testimony from another actress (Jeanna Fine) from the film and the second part of Jana Winters (Christy Canyon) testimony. At the end the jury reach a verdict but it cut there.


The second part isn't as good as the first one. To begin with it's very short (less than 60 minutes since 15 minutes is a recap of the first part), the DVD quality is quite poor as you can see in the captures, the movie is more about Savannah character (in that case your appreciation of her can do a difference, but I'm no fan of her so...) and the music is too loud and invasive.

I won't say that it's a pass since it's the second part of a movie in four parts, but it's not really enjoyable.
Posted by Jimmy at 9:30 PM