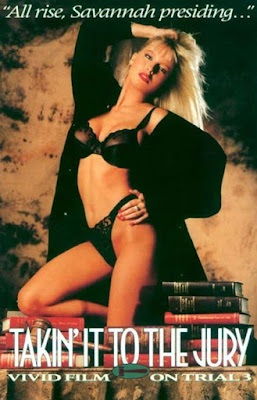 When we ended the last part the verdict was ready to be given... so what it is? Not so fast... in this part we go back in time and follow the jury deliberations. So be ready for a lot of legal talk...

First thing first, every actors on the jury from the previous parts have been replaced which make sense since they needed people who can handle dialogue and the previous ones were probably crew members or extra players.

Of course they don't only talk about what is obscene or isn't, to be honest that would be quite boring... so they watch scenes from the film and talk about how they would do scenes.

That sound a little bit boring, but in fact it's better than last part. The jury dialogue is funny and there is some variations in the sex scenes participants. It's a little bit cheap, but it's enjoyable.

For some weird reasons Vivid didn't released this one or the next one on DVD... sure doesn't make a lot of sense to release only half a serie on DVD, even more when the story isn't completed.
Posted by Jimmy at 2:05 AM