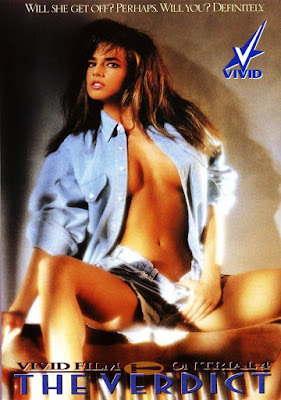 The film continue where it left in part three, so we continue with the jury deliberations to find if the last scenes of the film are obscene or not. First an interacial scenes who is of course shown as a fantasy of one of the juror since Raquel Darrian doesn't do interacial (in fact, she doesn't really do other man than her husband with some very rare exceptions).

Next it's the funniest one in all the parts of that film... come on, Peter North in drag in a scene this is something to see (casting a gay actor to do a real role reversal would have been even better, but I don't think that would have been appreciated in an early nineties straight production).

Next it's the only scene that I could see as maybe obscene, since it's a babysitter role play but to be honest the actress never said that she is underage (contrary to what happened in the Max Hardcore case) so it isn't... That one is played as a fantasy from the most religious juror.

Finally it's time for the last one, a really tame S&M scene who is again played as a fantasy. No idea why they didn't use Derrick Lane since he is suppose to be in the film who is prosecuted.

Like the previous one it was enjoyable, nothing essential (this is the case with the entire serie) but there is far worse Vivid productions. The end on the other hand is quite frustrating since you will feel like you have wasted 4 hours for nothing...