Third Wheel: The Insemination Of Elizabeth (2021) 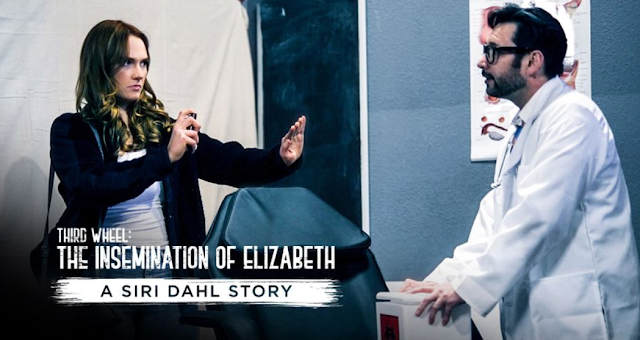 Six months have passed since Elizabeth was betrayed by her wife Terri who is now pregnant and they are separated now... The first part part is reviewed here if you need a refresher.

Elizabeth haven't change her mind, she wants a kid and to do so she takes an appointment at a clinic with a very high success rate. She goes at the clinic to meet the Dr. Torrance who is a goofball that doesn't really inspire trust, there is a certain creepy vibe emanating from him.

Obviously Elizabeth is reluctant at first but since she really wants to get pregnant she signs the release papers for the treatment... and what a treatment it will be.

One thing for sure that was different... in a good way. The insemination process is sure over the top with plenty of manual stimulation and a lots, and I really meant a lot, of semen... must have been a pain in the ass to clean all that after. Siri is a very good actress and she shown it in that short, too bad she haven't done much features films since she was pigeonhole in the big breast genre. Tommy Pistol is Tommy Pistol, no actor can't play everything as well as he does and stay believable (I have a feeling that the knee stuff was improvised by him, it came so out of nowhere). I must say that Siri looks way more happy and hot since she decided to go with a breast reduction.

As it was the case with the previous episode I recommend this one too... different but a lot of fun and it was written by Siri. Since it's open ended a third episodes will come later.