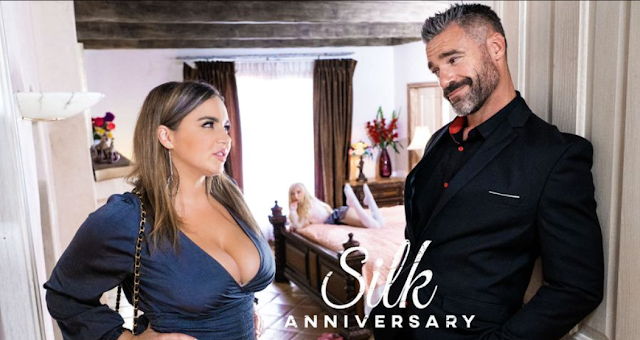 We are four years later and it's time for another wedding anniversary for our couple. This time it's Mr. Walker who waits impatiently for his wife to come back home.

She returns and, since it's their 12th anniversary, asks where is her special gift. He replies that she is in the bedroom... yep she. Mrs. Walker is absolutely not happy about this violation of their agreement, the gift has always been a young man not a young woman and she has zero interest in a girl.

Mrs. Walker after a while reluctantly agree to go with the plan since she feels that she doesn't have a choice if she wants to keep her husband. But be ready for a different vibes than last time since the couple argues a lot and I really mean a lot.

I can't say that it was as fun as the previous one, not that it wasn't enjoyable since Natasha Nice is Natasha Nice but the constant argumentation bring back memory of fucking a girlfriend when the relation is on its last leg. Now the acting is great, we see a return of the not so nice Charles Dera side and Kenzie Reeves cheery mood sure compensate for the constant Mr. Davis' critics. I would have like more lesbian actions, but that was more a gift from Mr. Davis to himself this time.

Like the previous episode this is only available via streaming but I have zero doubt that both episodes will be release together in a VOD double features in a near future.