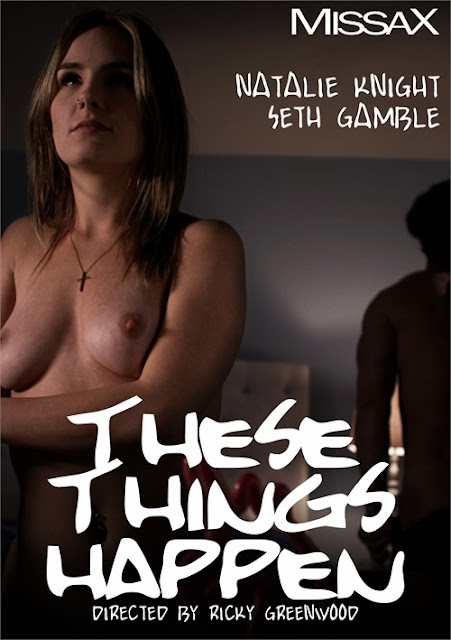 While waiting for the last two episodes of Under the Veil to be release I was wondering what I could watch and review. One thing for sure I wanted something from MissaX, so I did some exploration on the streaming service and found this short. I have appreciated Natalie Knight in her small role in The Cure so why not give it a go.

Elise works on her computer when she become more and more frustrated, obviously something went wrong. she's so vocal in her venting that Joel her older brother (the description says step but she calls him always brother in the film so I'll ignore the step thingy) who is on the phone decides to go see Elise in her bedroom to find what the commotion is all about.

After make him promise that he will keep everything secret from their father she tells what happened. She sells custom videos on an adult website (think OnlyFans or ManyVids) and she accidentally deleted the last one she did with her ex-boyfriend for a customer. Joel tells her to return the money to the buyer, but she already spent the money so it's not a solution.

Usually I'm not a fan of those false incest story, I just think that this step stuff is just a coward way to show something taboo that isn't. But this time it was different since the dreaded step word isn't used (except for the synopsis) which means that it's a brother and a sister. The other difference that I have really appreciated is that everything is the sister idea and the brother is reluctant which is unusual since 99.9% of the time the guy initiate the event or is more than happy to jump right into it. So Ricky Greenwood and MissaX did something different and enjoyable with a genre who wear off its welcome a long time ago. As I said in my introduction I choose this short because of Natalie Knight, I was curious to see how she would be in a starring role. I must say that she did a really credible acting job, obviously playing against Seth Gamble must help since he is a very good actor too. The sex is very good with a slow progression to fake at real and the conclusion is kind of funny.

Not a major Ricky Greenwood's production but it was enjoyable and certainly worth a purchase... You can watch the scene on the MissaX streaming service or purchase it on MissaX on demand or you can buy it on VOD at your favorite online store if you prefer.