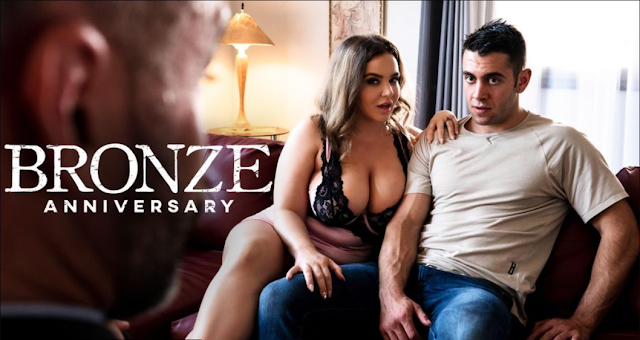 Time for a short feature in two parts from Pure Taboo directed by Bree Mills. I do the first scene today and the unless something change in my plan I'll do the other tomorrow...

Mrs. Walker is alone at home and she looks very impatient about something. It's her eighth wedding anniversaries and Mr. Walker is late. Finally he come back home from school, no he isn't a student but a teacher.

She asks him about her special anniversary gift but he is empty handed so I guess he forgot, no he didn't, just wait. The couple talk a little bit when someone knocks at the door, it's one of Mr. Walker's student who came from some private mentoring... looks like Mrs. Walker won't get her special gift anytime soon.

They go in the restroom where Mr. Walker presents his wife to Jason and she is sure happy to see him. The trio start some small talk, Jason become more and more uncomfortable since Mrs. Walker seems to be very interested in him.

OK it's time to reveal why Jason was asked to come: he is Mrs. Walker's gift... bet you didn't see it coming. They finally go in the bedroom to unwrap the gift and try it.

As you see the premises is simple but that scene was sure enjoyable. What's not to like? You have Natasha Nice who like a fine wine looks better and better with the passage of time, seriously she became fricking hot when she hit thirty! You have Dante Colle who is in my book the best thing that happened in the mainstream adult industry in the recent years, I'm sure glad that those old prejudices who appeared in the eighties are now a thing of the past. You have Charles Dera, a veteran who is always a welcome presence in a film. The dirty talk, who is certainly improvised on the spot, is just great and the sex is perfect (some would complain about the absence of DP but I'm not one of those). I like that Mr. Walker often complains during the threesome which means that he isn't the cuck he seems to be. Finally something that doesn't sound like that big of a deal but the fact that Jason came fast brings a lot of realism considering that he is an inexperienced young student... don't worry he is fine for a second round right after the fast delivery. My only complaint is the lack of breasts play, come on it's Natasha Nice so go for it.

At the time of my writing the scene is exclusive on the Pure Taboo and Adult Time streaming services.