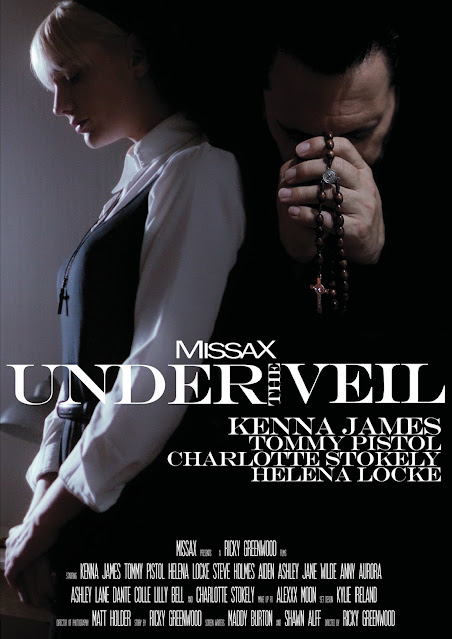 All good things must come to an end and it is now time to conclude this Ricky Greenwood nunsploitation saga...

Charlotte's book is almost done and when she receives the visit of Sister Kenna it's time to dictate the end of her manuscript to her. At least this is what she thinks, the visitor isn't who she think it is... it's Sister Helena and she is there to tie the loose ends to protect the Church.

Meanwhile Sister Kenna is with Father Tommy because she felt he needed her help. Indeed he needed it as he is always tormented by his needs and his obligations towards the Church, they talk for a while and finally they share their mutual love.

Afterward it's time for Sister Kenna to meet Charlotte but as we already know already she isn't in her cell anymore. Obviously she knows who is behind this and she goes to confront Sister Helena. She tries to convince Sister Kenna that everything is in her mind since Charlotte never came back after her excommunication but Sister Kenna won't take this as a fact and Sister Helena must take a more extreme solution to end the charade.

When the problem is fixed Sister Helena goes to Father Tommy to tell him that the Cardinal is waiting for him for his Ordination, but first he must prove his loyalty to the Church who wants a sacrifice... and this sacrifice is Sister Kenna. Father Tommy must decides between his love and the Church, thankfully he choose love and that scene is amazingly acted.

We jump four months later, Sister Kenna is at Aiden's office with the Charlotte manuscript of her second books and she wants it to be published no matter what the consequences for her could be... and what Charlotte told her previously became a reality.

Now this film is what a call a masterpiece! A film that make me happy to have gone over my prejudice two years ago that modern adult cinema didn't worth my time... fun fact: it was another MissaX production, For Your Own Good, that made me change my mind. This film is the first modern movie who reach my top ten and for good reasons. Seriously if we were in the seventies this film would be a huge theatrical success. For a time people thought the mainstream and adult cinema would crossover, sadly that never happen but in an alternate universe where it did this is what regular cinema looks like.

Everything technically is perfect: the cinematography, the scene lightning, the production design (Kylie Ireland really did works worthy of mainstream cinema), the make-up and the script. On the acting side Helena Locke is the revelation here, her interpretation of a character who is far from being likable was so good. Tommy Pistol gave another award worthy interpretation of a troubled character. Charlotte Stokely and Kenna James shown once again how great they can be with a good script.

It isn't for nothing if Greenwood is considered the best working director now since he hit gold whatever genre he does.

The film is available at the MissaX streaming service and also on their on demand store, but it will be on VOD very soon (in fact the cover I used will be the VOD cover). Obviously this film is a must own.