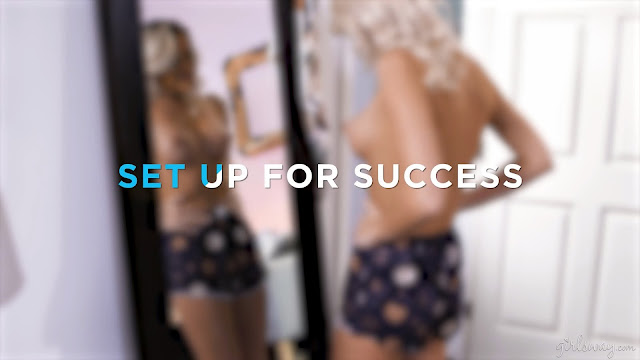 Almost a month since I have watch my last girl only film, so it's time to do one I think... Obviously my go to when I want a lesbian scene is Girlsway, so I choose a recent one with two actresses I like.

Two roommates, Kenna and Bella, are preparing themselves for a blind date set for them by friends. They talk a little bit about the person they are supposed to meet and after a while both of them leave for their date.

They show up at the same cafe for their meeting, it's a little bit strange but nothing that weird, They wait a little bit for their dates, but it looks like both of them chickened out!

Sure suck for them, but finally Bella has a flash... they are each other blind date! Indeed without knowing it their friends set them together. They have a good laugh about the imbroglio and decide to go home to watch a film since it's too late to do other plan. From there you know what direction the story will take.

Obviously this is predictable from the start since there are only two actresses in the opening credits, but who cares? It's a fun little scene with two beautiful women and the staging of the last act was perfectly fine. A lesbian scene just as i like them with a good chemistry between the performers so it looks real and let's be honest the sex was amazingly hot! But I have some problems with the technical aspects, the cameraman move too fast with his camera some times and the editing could have been better (seriously there are jump cuts who look really unprofessional which is strange since the guy works for Adult Time since a while).

Sure worth a watch and as usual this is a streaming exclusive... so you can only watch the scene via the Girlsway or Adult Time service.