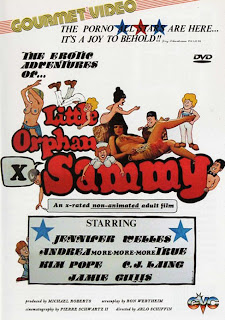 The version I have is not the original that lasts 6 extra minutes according to the Internet Adult Film Database (I wonder what was cut?). Despite this it's still an enjoyable comedy. This film is a spy story (but I'm very generous) where a Russian organization (the accent seems to indicate it, but maybe they are Hungarian) led by Hata Mari (Jennifer Welles) who tries to steal a formula discovered by Daddy Sawbucks (Neil Flanagan) to convert waste into oil. In order to approach Sawbucks the organization decides to adopt Sammy (Rocky Millstone) who is the lost son of Sawbucks.


For a rare occasion I begin with the negative. Rocky Millstone is the worst actors I've ever seen. He does not sound natural, he has  a lot of trouble with his text, he is annoying and he even has difficulty getting an erection. Definitely an odd choice to be the leading character in an adult film (he is also in Through the Looking Glass and Maraschino Cherry, but I am unable to recall his performance). That's all I really found negative to this film.


The bad acting of Millstone is amply compensated by the performance of Jennifer Welles, although I must confess that I prefer the movies that she made early in her career under the name Lisa Duran (Career Bed is certainly in my opinion one of the best New York independent film of the sixties). hearing Jennifer Welles, Jamie Gillis, CJ Laing and Andrea True talking with an Eastern European accent  worth the price of admission alone (they even managed to keep it for almost the entire duration of the film). The beginning where Sammy does his farewell to the employees of the orphanage (Nikki Hilton, Helen Madigan and Jennifer Jordan) is just as fun with the extreme patriotism of Little Sammy. In fact this film is almost a love letter to the American way of life. Add to the ensemble an effective script from Ron Wertheim (not necessarily a surprise when you know he also wrote Through the Looking Glass one of the best films ever made all genre included ) and you have a real winner. One last thing : you will get the expression Leapin` lizards! stick into your mind after your watching. 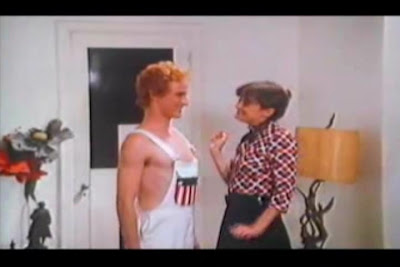