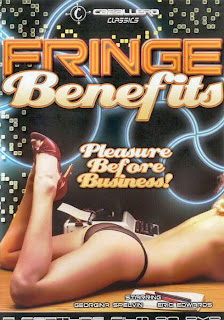 Nice little film from the early seventies that I found while I was looking for some interesting things to watch by video on demand. It has an interesting distribution with Eric Edwards, Georgina Spelvin, Darby Lloyd Rains, Cindy West, Michelle Magazine, Kevin Andre, Susie Mathews (her only film, but I wonder if she was related to Paul Matthews, one of the first actor of this genre), Jeffrey Hurst and Harding Harrison (an actor who frequently appears in non-sexual role in the production of this period). The story begins at a clinic for sexual disorders where Harry (Eric Edwards) consults a doctor (Georgina Spelvin) because he can no longer get an erection. During the consultation we learn that he was responsible for a benefits program within the company where he worked to prevent the arrival of an union. What benefits? Sexual benefits of course. He was performing  as a stud to satisfy the female employees (Susie Mathews, Cindy West and Barbara Cole). The program works fine until the day he  decided to apply it also to the personal secretary (Darby Lloyd Rains) of the big boss (Harding Harrison). Of course he doesn't appreciated it too much when he catch them, wich he will exhibit by sacking Harry. The doctor find that it's the reason of Harry's problem and that will  be cured by a treatment with a new machine created by the Dr. Cherrypopper (Kevin Andre), but there will be a serious problem. What problem? Sorry I've said enough ...
As I said it's an enjoyable film to watch. A good talented acting male cast with Eric Edwards (for the fans, he is almost in all the scenes), Kevin Andre and Harding Harrison. A good looking female cast with many one or two timers. A lot of funny moments, but I must confess that it's the juvenile type of humor (but thank God not the "pee, poo, fart" type).

This film available in video on demand through GameLink or on location through X Rent DVD.
Posted by Jimmy at 12:46 AM