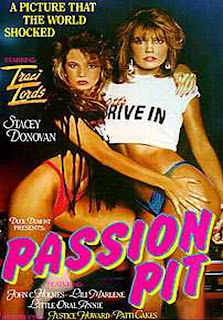 This one has a special place in my memories as this is the first adult film I've seen. For the 15 year old kids that I was it was love at first sight and a love that always last 25 years later. The funniest is that it took me years to finally learn the title since I had watched it on a VHS tape containing six hours of anything. But with a general description and a little help from some friends I eventually find it out and get it. This wasn't that easy for the reason that everybody knows ...


This film is easy to resume in one short sentence : a night at the drive-in. So no big complicated scenario in this film, which is a good thing since my version is dubed in french (even if it is my main language, the over the top dubbing of the French of France fall on my nerves by its ridicule). The vast majority of the film is composed of sex scenes, but this does not seem endless because of the way the movie was edited. Indeed the film goes from a first scene to another  one and then back to the first and so on. All this is rather effective and arousing (the only exception being the one between Justice Howard and Jon Martin who is quite boring compare to the rest). The film also includes an excellent cast with Traci Lords, Stacey Donovan, Patty Cakes, Little Oral Annie, Lili Marlene, Ashley Wells, John Holmes (despite the fact it's obvious that he was already sick), Dan T. Mann, Don Fernando and some others. It was also filmed in a real drive-in wich adds a nice touch of realism, without mentioning the superb night cinematography job by Guido Williams (oddly it was his only credit as director of photography). Another interesting point is the soundtrack that gives the impression of listening to a jukebox in continues (to the point you want the boring dubbers to shut the fuck up),  indeed you can hear Billy Joel, Allan Parsons Project, ABBA, Linda Rondstadt, Paul McCartney, The Associations and many others.
At first I was not sure to mention the place to obtain the film as I usually do since Traci Lords is in it, but as my blog is read also in countries where they are completly legal I choose to do. This film was released by Alpha France like many of her other films in a 3 movies dvd set, they are only in french without any subtitles but the quality is quite good. You can buy it here, but be warned that it's really complicated .
Posted by Jimmy at 3:27 AM