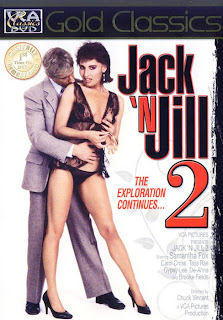 I wrote about the first Jack'n Jill in the month of February and you can read it here if you missed it originally. In this second part, which takes place four years later things have changed for our couple. They are more and more absorbed by their work (Jill is now a psychologist) and goes away from each other little by little. The games that put the spice in their marriage during the first year of it doesn't seem to  work anymore. Just look the jaded attitude of Jill at the surprise that Jack has prepared for their fifth anniversary (a surprise which is not what it seems) or the total lack of interest from Jill during a three couples orgy. The breaking point will arrive during an exchange of couple between them and the Jack boss' couple. The couple split after this one and each of them goes in seperate ways. But are Jack and Jill permanently separated? You should watch the movie to find out ...


I grant you the synopsis may seem depressing as I've written it, but it's still a comedy. The Jack's surprise that starts the film, the too great enthusiasm of one of the participants (Taija Rae in a great performance both artistically and physically) during the orgy or a secret restaurant meeting are all moments when we smile. Of course there is the moment of the separation, which is not very happy, although everything is done cordially but it's a bit too close to reality. There is also the fact that Jill sinks in the alcohol after the break-up that makes it hard to watch when we know what was happening in the life of Samantha Fox during this period (but that gives us one of the weirder scene I've seen mixing oral sex and regular sex). Another good performance from Jack Wrangler and Samantha Fox in the first role and from Jerry Butler, Taija Rae and Johnny Buck. Not as good as the original, this film is still a notch above most of the production of this era since we talk about a Chuck Vincent's movie.
This film seems to be out of print. Excalibur Films always have the dvd in their inventory but not in stock and as it seems not available on the VCA website there is little chance to get it through them. But you know already that I can help you better than that. I found it on a website that I won't name or link since I don't trust a website who sells a title 29$ but charge more shipping for the case and the cover art. The way to get it is easier than that and it's Adult DVD Marketplace who is always a good place to check to find adult materials for a good price.
Posted by Jimmy at 3:51 AM