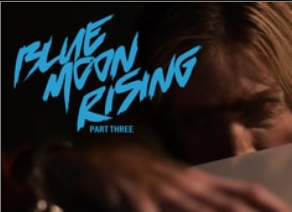 All good thing must come to an end, so it's time for the conclusion of Blue moon Rising... You can read my reviews of the first and second parts by clicking on the links if you haven't read them yet.

After she woke up on floor Aiden decide to go talk with the woman who found her the following day of Dante murder. They talk a bit and quickly Aiden realizes that she seems to know a lot about her.

Aiden receives a phone call from Detective Greenwood who wants to meet her about the case and protect her from the biker gang who are suspicious of her since two men who left the bar with her are now dead. They talk a bit but the mood change fast when Aiden predatory sexual side take over and force Greenwood in a fricking hot scene as Aiden only can do.

The following day Greenwood is always alive so he is the only survivor of a sexual encounter with Aiden. She left him to returns at Brooklyn's house and this is where the real trouble will begin: the gang follow her and they invade the house to get their revenge. 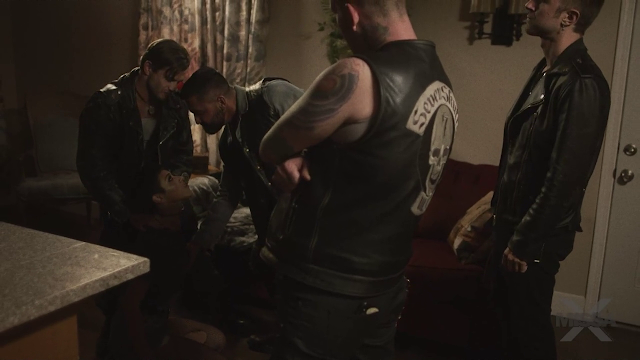 Really bad idea since they aren't the predators they thought they were. After taking care of this problem, Aiden takes care of Brooklyn like she did when she found her hurt in the forest. They don't stay in peace for a long time since Greenwood arrives at the house with a warrant to arrest Brooklyn, Aiden refuses to cooperate and he apprehend her for obstruction of justice.

At the station he interrogates her, but the process turns quickly to "intimidate the witness" mode and that will be the biggest error of Greenwood life.

This was the film I anticipated the most this year and my expectations weren't betrayed. Ricky Greenwood really did a good mix of adult cinema and horror with this production without giving everything too fast since the real payoff is in the conclusion (twice rather than once). Aiden Ashley shows why she is a real actress in the final act with her physical acting who sell the transformation process 100%. The special effects for the second transformation are well done and like I said Aiden physical acting really helps, on the other hand the first one isn't as good but I give it a pass and see it as incomplete since it had to be done fast as the attack on the werewolf was quick and uneven. Finally we see Tommy Pistol in action and the wait was worth it as the scene is incredibly hot and both him and Aiden dominate each other, seriously the sexual energy on display just burn the screen. Honestly Aiden Ashley is an incredible actress and she really deserve a chance to be in a non X rated film some day, I have sure seen many a list actresses who doesn't have this level of acting.

Highly recommended and certainly a good contender for the movie of the year award this year...

Like the previous parts this, at the time of my review, is exclusive on MissaX on demand but it should be available in its complete form pretty much everywhere in not too long. By the way the end shout sequel so I hope we will get one.