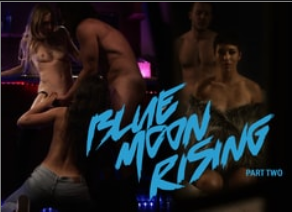 Time for the middle part of the most recent Ricky Greenwood's film, I have already reviewed the first part a couple of weeks ago so if you need a refresher just click the link...

One month later Aiden is at a bar and it's a slow evening at the place, so much so that the owner thinks about closing early.

She starts a conversation with the barman (Brad Newman) and one of the other client (Nicole Sage), she talks about her boyfriend who cheated on her and that maybe they could use the fact that nobody else is there to help her having her revenge on him. That doesn't fall in deaf ears and it's time for hot revenge sex.

Next it's time to go back at the investigation of Dante Colle's character murder, not much happen here but we see some very gruesome crime scene pictures. This is the only time we will see the detective Greenwood (Tommy Pistol) in this episode.

After that short interlude, we meet Aiden in her bed with someone (her boyfriend?) while she is haunted by flashbacks of Dante murder including a blink and you'll miss it detail (no I won't say it). She goes out for a walk and stop at the window of the woman who found her unconscious in the Forrest the previous month.

She hears a voice telling her that it's time to see who she really is so she decides to stay and watch. The watching being a sex scene between Brooklyn and Codey with quite an animalistic vibe, at least on the female half of the couple. Something happens after or maybe something happens, it isn't clear yet if it was real or just a mind trick.

29 days later Aiden wake up confuse in her bedroom, she's naked and the floor is full of dirt like she is. She pick the detective card certainly to call him and we see a man in the bed (probably the same one than before)... the end.

The middle section advance the story without giving too much, we get some ideas but we aren't in the know yet of what happened the night of Dante murder. But one thing for sure we are in for a hell of a conclusion in a week or so when everything will become clear and we will, at least I hope, get more screen time with Tommy Pistol. Once again the scene lightning is perfect, some could complain that it's a little bit dark but this is the way I like it (as I said before, over-lighting a film just look cheap). Both sex scenes are great but the threesome between Aiden Ashley, Nicole Sage and Brad Newman is the highlight.

As it was the case with the first part this is exclusive on the MissaX streaming service at this time but obviously it will be available at a future date on VOD at large. Of course if you are like me you can buy the episodes directly from the MissaX website as they are released.