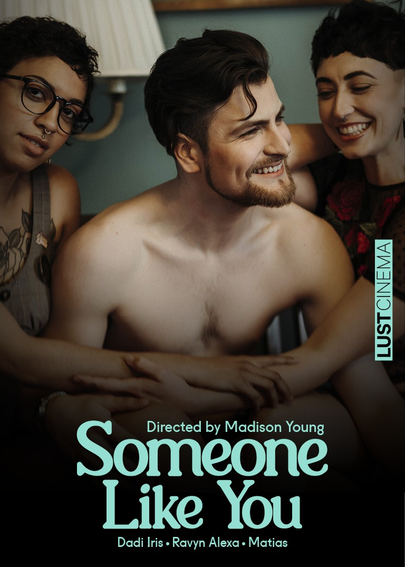 Marilyn (Dadi Iris) and Jackie (Ravyn Alexa) meet each other one evening at a party, not exactly at it but it's the cause, and it's love at first sight. So much so that they get married and their love flame continue to shine.

After some years of marriage Marylin and Jackie decide to have a child, but it gets complicated when Marylin learns after a series of test that she can't conceive a child. The bad news aren't over since Marylin also learns that her TV show is cancelled.

She is hit hard by both news and fear that her couple is over, but the chemistry between them is too strong and the couple resist. But a new tenant move in the upstairs apartment and Marylin catch his eyes, he does his move but she refuses since she is happy in love. She invite him for a diner at her apartment the following day, Marylin and Jackie who want to revive the passion of their early years decide to offer him to play a game... obviously you know what kind of game it is.

This doesn't happen often but no one in the cast where known to me, last time it happened was with Mirror Game last december. I must say that the chemistry between the two actresses was incredible, it's almost like they were a couple in real life, and both of them can act which is a good thing since the wouldn't work if they didn't sound natural. The film is short, just a little bit more than one hour but Madison Young gave us an interesting love story with sex scenes who aren't overlong but work perfectly. The film photography is really beautiful with some drone photography and some subtle details (by example the dust in the light when Jackie watch her computer after she made the bed).

This is the second Lust Cinema production that I watch and I really appreciated what they do... maybe I should watch the VOD of Primary I have purchased earlier this year (to be honest I won't have a choice since Primary 2 is coming soon).

At the time of my writing the film is exclusive on the Lust Cinema streaming service with a bonus behind the scene that you won't get when it will be release on VOD later.