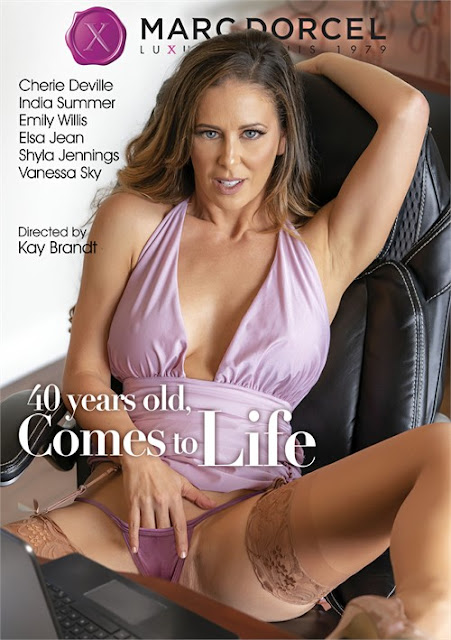 A Marc Dorcel production but no need to worry about the language this time since it's an American project directed by Kay Brandt so it was done in english...  there is a french version available, but obviously it is dubbed so I went for the original version.

Kelly (Cherie DeVille) is a successful novel writer and she works on the third volumes of her trilogy starring Carson (Codey Steele).

Kelly isn't satisfied enough and she wants to become a lesbian like her sister (Elsa Jean) and she will come to visit her for some advice and too vent her frustrations. But before it's time for a girl/girl scene between her sister and her girlfriend (Shyla Jennings).

Kelly come back home and she starts a conversation with the characters of her book. A conversation quite funny by the way and the end of that idea of becoming a lesbian since she creates a new character to be her fantasy.

That was fun and a little bit different than the usual production offered by Video Marc Dorcel. Kay Brandt who wrote and directed the film give us a good comedy and a good story from the woman point of view without being a feminist film. Cherie DeVille is very good in her role as where everyone else who had to act... Ramon Nomar accent isn't easy to understand (give me chance, accent are though for me) but since he was there mostly here to be a fantasy character he didn't have much to say. The sex is quite hot but sometimes a bit too long, at least for the scene between Emily Willis, India Summer and Codey Steele. But on the other hand we get a girls scene with Shyla Jennings so I can't complain that much. Also I'm almost sure that India Summer put an end to her career so it's one of her last movie. Finally the person isn't credited so I have no idea who did it, but Cherie DeVille wardrobes is one sexy outfit after another.

You can get this film on streaming on the Marc Dorcel xillimite service in french or in english if you are a member. If you aren't you can buy the film on VOD at your usual store, just double check on the version you'll buy.

I certainly recommend the film, even if I think it could have been shorter...