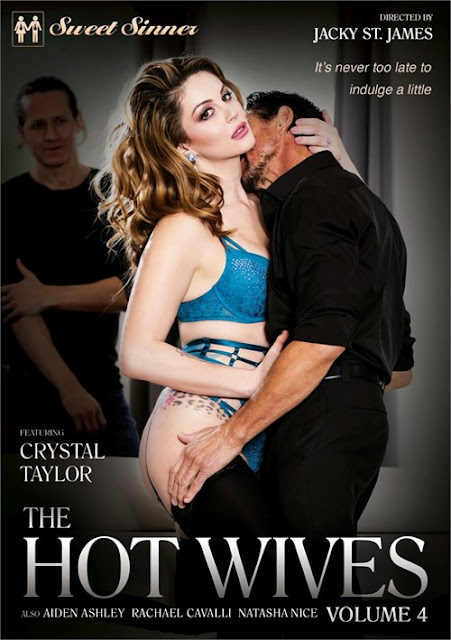 Not a feature as I usually review this time, but a vignettes concept. So it's basically a series of loops based on a common theme: hotwifing. What is hotwifing? Easy, it's happily married couple exploring sex outside their marriage to enhance it and live some fantasy.

In the first vignette, Crystal have her first hotwifing experience with an older man. She wants to keep her options open in case she would change her mind... obviously she doesn't. The scene is quite romantic and it was great to see Tommy Gunn I haven't seen in many films recently. I must say that Crystal Taylor who is a relative newcomer have an amazing tattoo on her lower back.

Second vignette. Rachael is alone at a club when the barman notice her and he starts a conversation with her. She gives him a sheet with her hotel room number and she tells him to meet her there at the end of his work shift. Once again this is a very romantic scene and it ends on joke since contrary to what he thought Rachael isn't a bad girl cheating on her husband.

In the penultimate scene, Aiden have some reservation about this hotwifing experience, not that it is her first rodeo but Derrick is her husband best friend and she fears the consequences. They have a long conversation and decide, obviously, to go with it. Now this is the one I waited for since Aiden Ashley never disappoint, honestly I have never seen her giving a bad performance. She's matched with Derrick Pierce another veteran so the scene is just great and the chemistry sell the performance perfectly. That scene have the most dialogue since Aiden and Derrick are also good actors who can handle lines.

We conclude with Natasha who will film her encounter with one of her husband student. Which means that we will end with a bang since Natasha Nice is one of those women who age like wine, she just get hotter with each passing years. She often does eyes contact with the camera (not the one hold by Mike Quasar but the one on the table) and we even get the camera point of view at some point. Obviously I love this vignette since I prefer women with bigger natural breast in real life.

All in all the release was enjoyable since we have four different type of actresses, so there is a little bit of everything for everyone.  I'm not sure if it worth a purchase (the DVD comes with a behind the scenes extra if you choose to go this way) but it's definitively worthy of a rent.

You can find it easily in most adult web adult stores on DVD and VOD.