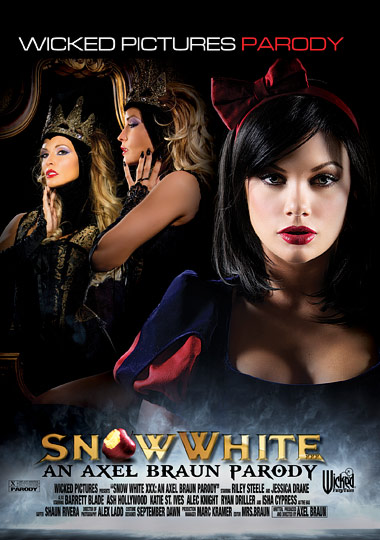 Since Disney are actually working on a live action remake of Snow White that will certainly sucks like all the other ones they did, so why not review the live adaptation of the classic fairy tale directed by Axel Braun.

Today is the birthday of the King and to celebrate the occasion the Queen have a special gift for him, two fairies to fulfill all his sexual desires. But all this is part of a plan to kill the King so the Queen will become the sole sovereign of the land. After a long night of lovemaking the king's heart gave up...

One more obstacle stand in her way, the Kings' daughter Snow White. To fix this inconvenience she enlist the help of the huntsman which whom she have an adventure. His mission is to bring Snow White to the forest, killing her and bringing her heart back to the Queen.

The huntsman is unable to kill Snow White and, after hiding her in an haunted cabin, he brings the heart of an animal to the Queen to prove that the deed is done. Sounded like a good plan but she realizes the switcheroo and with the help of her mirror spirit she poison an apple.

An old hag is responsible of bringing the poisoned apple to Snow White. After accepting the gift she takes a bite and lost consciousness immediately. While she is knocked out she receives a visit of the Queen inside her mind.

Later a prince finds her unconscious in the wood with the help of the dwarf ghosts (yeah no little people in this version) and she thank him with a lovemaking session. One month later Snow White returns to the castle and unsurprisingly the Evil Queen tries to kill her. But she fails as one of the guard kills the queen. Snow White and the Prince get married and will life happily ever after... unless.

As expected this was really enjoyable, even if we know the story as we all read it when we were younger. Riley Steele is perfect as Snow White bringing the perfect innocence and look for the role. Jessica Drake is also great as the Evil Queen, in fact she got more screen time and actions than Riley Reed but that make sense since Snow White is suppose to be pure and innocent. Some could complain about the absence of the dwarves, but that's fine with me since I didn't need a gangbang with seven little persons. The set decoration is well done (the castle interiors could have been a little better on the other hand), the costumes are very good and I really love the soundtrack. My only critics are the inclusion of the scene between Riley Steele and Jessica Drake (not that I don't like a girls scene but that felt forced and superfluous) and the use of prophylactics since that destroy the illusion.

You can watch the film via the Wicked streaming service if you are a member or you can buy it on DVD or VOD at every adult online or stream it if you have an unlimited account at some store (I know obviously that GameLink is one of them since I own an unlimited account).