Can Never Make It Up To You 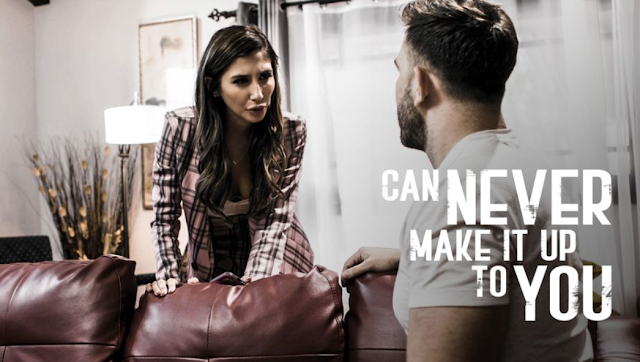 Wendy (Gianna Dior) is home alone when suddenly someone knock at her door. She doesn't know who he is but she decides to let him enter since he have something important to tell her.

The man is quite nervous and for good reasons... Wendy's parents were killed in a car accident and Robert's wife was behind the wheel and are in jail for drunk driving manslaughter, as you can guess she isn't please when she learns that he is the husband of the woman who left her an orphan at eighteen years old. But Robert is really sincere in his remorse and wants to make amends, so Wendy decides to give him a chance to redeemed himself.

Against all odds as the weeks become months they start developing a friendship and all his well until Wendy receives a message telling her that Robert's wife will be set free because of a technicality. Robert tells Wendy that he doesn't talk to his wife anymore, Wendy ask him to leave his wife and to bring their friendship to the next level.

I won't lie, this Kay Brandt directed scene is one of the creepiest I have seen from Pure Taboo... not because of the sex since it's just regular sex, but because of the fact that Wendy sleep with the man who is indirectly responsible (he knew that his wife was too drunk to drive like he was) for the death of her parents. Not that it wasn't enjoyable since it's well made, tastefully done and a demonstration of forgiveness (on steroids but why not). Both actors did a good job, but Will Pounder is better at acting his emotions. The sex is fine but like I said it's conventional, remove all the creepy context and this isn't that special.

A little bit better than average mostly because of the creepy factor... at least it worth a watch.

You know the drill already... exclusive on the Pure Taboo / Adult Time streaming service since the scene was released two days ago at the time of my writing.