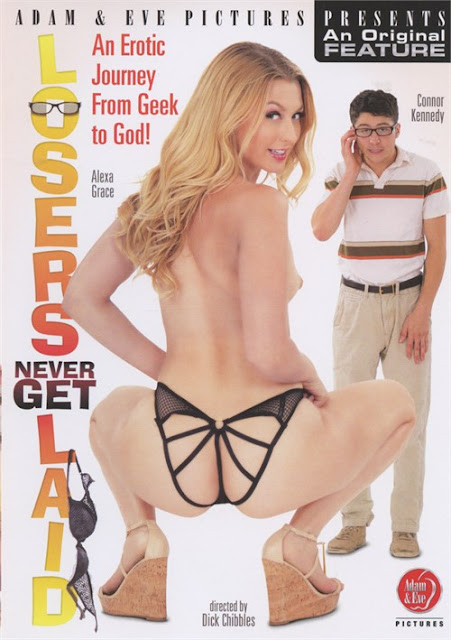 Time for a comedy and I picked one directed by Dick Chibbles for Adam & Eve, so nothing extreme just good clean fun.

Mike (Connor Kennedy) is, to be polite, a loser and a nerd who haven't had much luck with the women since his girlfriend (Mercedes Carrera) left him for another man (Evan Stone). He counts on his best friend Jared (Tommy Pistol) but this isn't like he can help that much, his method is to pay the girls to be with him.

They plan an evening at a gay bar, as Jared said there is less competition for the hot girls in a gay bar (I don't think that it works like that). We will never know if this is true or not since Mike shows up alone at the place and at least he catch the attention of a gay customer (David Lord). Jared is waiting for him at another club with two other girls.

Of course Jared did pay one of the girl to be with him and the other one (Britney Amber) is Mike's date. In theory she is, but Mike being Mike she lose interest fast and goes for a stranger alone at a table. They go at the bathroom for a good time and Mike got himself kick out of the bar for being a creepy peeping tom.

Mike is knocked out near the trash container, he wakes up, pick a magazine and this is the night were is life will be changed forever. Ron Jeremy will mentor him to improve his method with the opposite sex, but he is the only one who can see him. He'll try the Jeremy's method first on two strippers he meet at a club but that result as a girl girl scene.
After a virtual visit to Mike's ex-girlfriend it is now time for the real test. He will have to pick a girl with the help of Ron who will tell him what to say... and it works great since he left the club with three women!
Mike finally learns the obvious: confidence and believing in ourselves is the key to a better romantic life. He turns his life around, gets his own company and gives a job to his friend Jared who didn't change... he always pay women to be with him.

I won't say that it wasn't predictable, it's pretty much the type of romantic comedy where the plain character ends with the popular guy but this time the character is a guy and not a girl. One thing I must give to the film is the casting of Connor Kennedy for the loser, he was perfect for this role since he doesn't look like a typical male performer but a kid. I can't say that I'm a big fan of Ron Jeremy but he did a good job and got some funny moments. Talking of fun time, David Lord is awesome in his gay character (wait for the end credits for more of him) and Tommy Pistol is also good playing another loser (come on, he isn't much better than Mike). The sex is conventional but it does the job, I've particularly appreciated the girls scene (what a surprise right...) and the threesome at the conclusion. Too bad Dick Chibbles didn't do more movies since that was a fun little unpretentious comedy.

I've watched the film via my Gamelink Unlimited account, but if you aren't a member you can easily find the movie on DVD and VOD where you usually purchase your adult film.