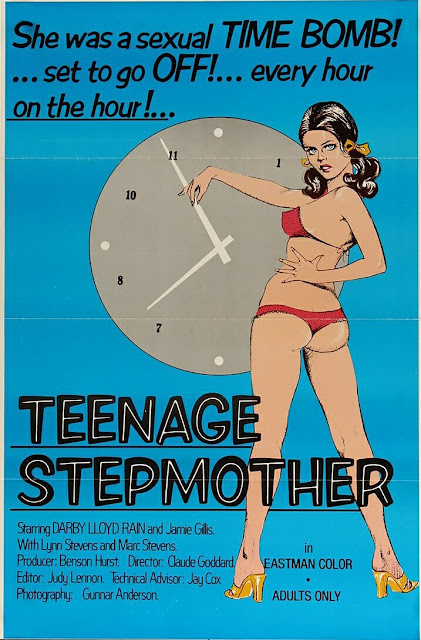 Probably the lesser known film made by Claude Goddard or Gerri Sedley whatever name you prefer, anyway both of them are aliases. This one is certainly less mean spirited than Winter Heat.

It's wedding day for Harvey and Linda and the ceremony is officiated by a judge played by Marc Stevens. To conclude and make the marriage official we get something better than a traditional kiss and for some reasons the judge is part of the actions.

When they come back at the house after the ceremony, Harvey's daughters are curious since their new stepmother is younger than the older sister so they decide to spy on the new couple while they share some love... but the newly married aren't the only one to share love since we get some sisterly incest too.

Finally we learned that Linda have a small problem, if we can call it one, she must have sex every hours of the day. That must be quite a task for a husband but at least he is fine with sharing.

After the rape of the house driver, kind of since it's played as a joke, by Linda who was tricked by the younger sister who forwarded the hour to trigger her. The older sister catch a peeping tom outside the house watching the actions.

She doesn't seem that offended since she gave him oral sex outside before bringing him inside the house to share him with her sister.

Without being a masterpiece this is enjoyable, there are some real funny moments and it is always nice to see a film not filled with big names... of course the male are stars and Darby Lloyd Rains is one too, but I highly the casual viewers know who Lynn Stevens, Sandy Fox, Day Jason or Heather Ellis are. Be warned that the music is very invasive during the sex scenes.

Sadly the GVC DVD is nothing to write home about but is it really a surprise? So don't waste your money on it and go for a rent instead. We never know, maybe we will get a better quality release someday because it's certainly a fun film to watch.