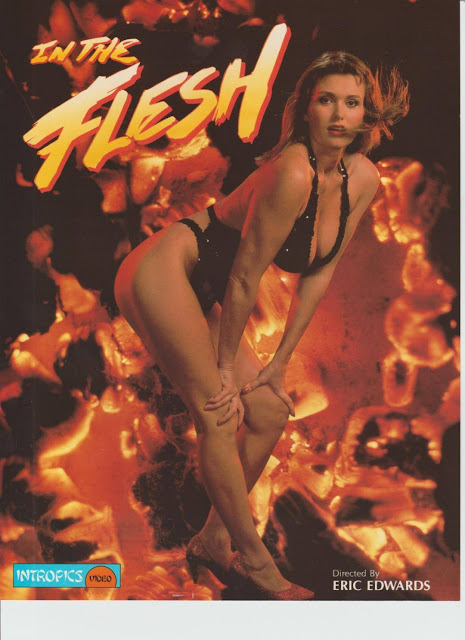 Hell have a new boss, kind of... Satan is absent and his wife (at least I think she is) is in charge and she rocks with the Christina Lindberg's look from Thriller: A Cruel Picture. No idea if it was voluntary or not but this is sure cool.

She wants to be in charge for good and she has a plan to do so, convince a pure virginal girl to sell her soul and Chris is the perfect candidate for her experience.

First she try to do it via one of her friend creating visions in her mind... a pure wedding and we could say a less pure wedding ceremony.
It doesn't work so time for plan two, using her assistant to show up in the form of Chris' boyfriend to make her sign the contract (using treachery of course). By the way, this made me laugh out loud but will it work this time?


Also the film is often interrupted with a TV broadcast from WSIN presented by Peter North who read the most recent news from hell followed by a product publicity. This sound kind of strange, but it works.


This is a film I knew nothing about until Eric Edwards asked me about it earlier this week, come on I have thousands of movies but I certainly don't know everything. It wasn't that easy to find for sure, so I have uploaded my copy online on a tube site and I'll give the link at the end of my review if you want to watch it.

Obviously this is a small budget production but honestly what wasn't at the end of the eighties. But as usual because of the good lightning it looks better than a typical low budget tape productions, I sure like the red and yellow color scheme used in hell. Also it was nice to see Stacy Lords in the leading role, I think it's the first time I've seen her playing the main role of a film.