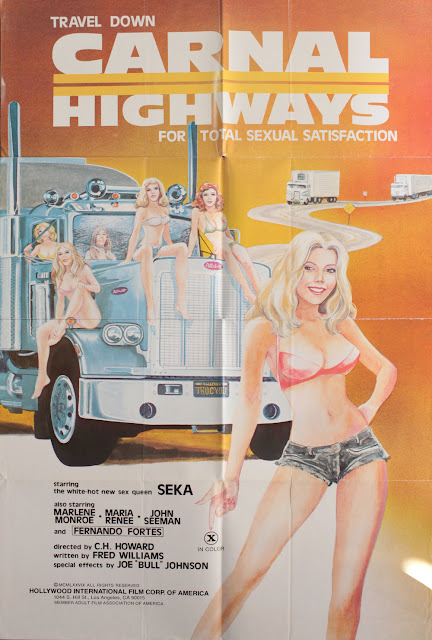 As a way to combine business with pleasure John and Fernando buy a truck to do delivery, as we know truck drivers score a lot of girls. It doesn't take long for them to check their theory when they pick an hitchhiker and goes with her in the back to test if she is a lesbian.

After that first adventure they stop at a truck stop and while they are there a prostitutemake a proposition at John, so we return at the back of the truck.

Next they stop at a motel where they took a room for the night, but before going to the room it's peeping tom time and we got badly shot time fillers with David Morris and Juliet Anderson. After that interlude they go to their room and call a couple of masseuses (wasn't the point of getting the truck was to get girls because you sure don't need one to score hookers and masseuses). 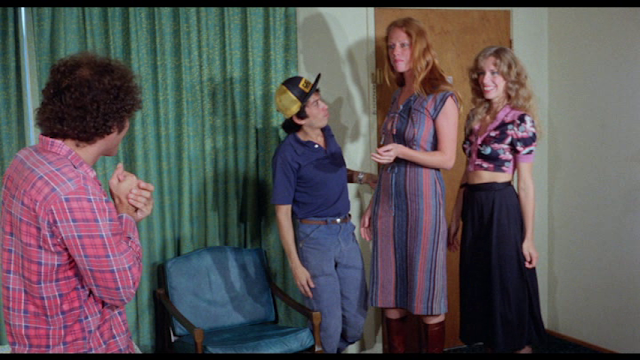 On the way to do their delivery they got lost (at least I suppose) and Fernando goes to some random house to ask about a school which is where they must deliver their load. More sex happened with a bored Seka and a less bored, but just less compare to Seka, Marlene Munroe.


Finally they arrive at the school to do their delivery and the professor in charge is Carlos!!


Seriously that wasn't good at all, at least not as it is. There are many problems with this one and no way Cecil Howard or Carlos Tobalina did this film. First problem is Fernando Fortes who didn't get hard a single time, come on if you pick a guy to be the lead try to get someone who can do the job (we can't even say that he got the part because of his acting). Next problem, the camera operator doesn't know how to shot and frame a scene... seriously it looks bad widescreen so I feel sad for those who saw this full frame via a VHS tape. Finally the music, it's all boring musak who doesn't fit with anything.

Never thought I would say that but Carnal Olympics is the best film on that double features and I didn't like it that much to begin with...

I hate to say that because Vinegar Syndrome did a good restoration job with this new volume of the Peekarama series but I don't really recommend this disc at all... of course nothing prevent you get it via one of their sales, at least you will pay less.