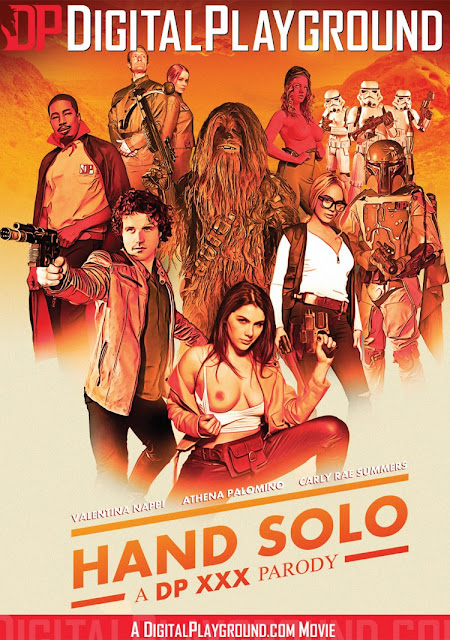 An English production directed and co-written by Dick Bush for Digital Playground, so you know you're in for a good time.

Hand Solo (Robby Echo) hears while he works as a club barman about a ship crash and the reward offered for its cargo recovery. Obviously he is interested since he wants to be known as the biggest smuggler of the galaxy.

He must find a ship for his mission and, of course, being a bartender he doesn't really have the money to rent one, so with the help of his friend Raina (Valentina Nappi) he will stole Brando's ship to kick off his mission... not that he really knows that it was the plan.

So they took the spaceship and win a crew since two people are already inside it since they were doing reparation works on the ship.

All went well until they find the crashed ship where they encounter Boba Fett (Danny D uncredited) and Jaxxx (Carly Rae) who after a fight take over their ship and their recovered cargo.

And as if that wasn't enough Hand Solo and Screwbacca are captured by the Empire forces to make an example out of them.

Is everything lost? Will Raina and Nomi escape from Boba Fett grip? Will someone will be able to rescue Hand and Screwie from the Empire before their execution? I let you find it... even if the answers are obvious.


This film is another winner from Digital Playground and you never feel bored even if the film is almost two hours and a half long. The story co-written by Dick Bush and Della Darling is quite interesting and the sex scenes are well integrated and none of them looks like they are there just to fill a necessary quota. The visual effects are quite good and some line exchanges by the actors are quite funny.

Obviously I recommend this one...

Digital Playground is sure on the way to change my ideas on modern adult cinema little by little.