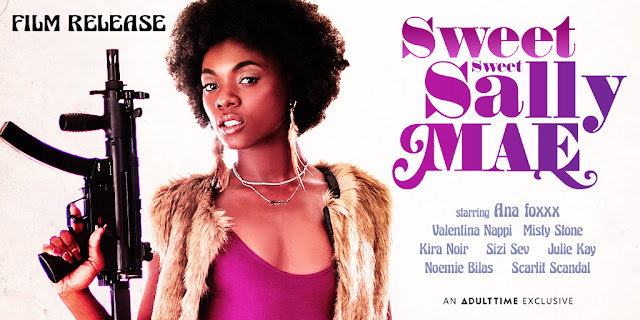 A throwback to the seventies blaxploitation cinema directed by Ricky Greenwood and, to make things better, an all girls film.

Sally Mae shows up at nighttime at Polly's house for a transaction, money in exchange for the address of Miss Jane one of city big drug overlord. The transaction is completed and it's time for the first scene between Polly and her girlfriend Ella.
After getting the address Sally Mae doesn't waste any time to go meet Miss Jane under the pretext of doing a drug deal with her. But there is one problem, Miss Jane suspect a foul play and Sally is knocked out unconscious while leaving the house.
She woke up tie up in a bed ready for an interrogation by Miss Jane' right hand girl to find from who she got the address. It doesn't work and an interrogation expert is called to get the find the information by any means necessary.

While Sally Mae is interrogated she began to have flashback and this is where we discover the reason of her vendetta against Miss Jane (of course I won't tell you). The interrogator is in for a big surprise, Sally Mae isn't some ordinary girl she's well trained, she gets rid of her ties and escapes.

While this happen Miss Jane and Tina, her main girl, are sure that Sally Mae will talk since she is the hands of a torture expert and decide that it is time for a celebration. Of course we know that Sally is coming to get her revenge and this is what she will get at the end.
All in all that was an enjoyable film and since it's blaxploitation we see some actresses we aren't used to see in major parts. The cast is all black except for Valentina Nappi which make sense since the bad guy in that genre was, more often than not, white.
Ricky Greenwood used only natural lights for his film and I really like that since it gives a more professional look to the production. Add to that a cool soundtrack and you get a good results.
The only negative I can find is the lack of exterior scene, just some street or city footage would have brought a good moving flow for the chapters transition.
At the time of my writing the film isn't available commercially and you must be a member of the Adult Time streaming service to watch the movie, but believe me the service worth all the money you pay since it's the best around.
Posted by Jimmy at 1:07 AM