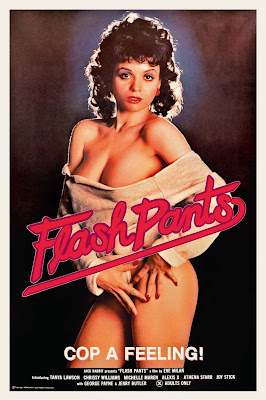 First of the three films directed by Erica Havens for Jack Bravman and contrary to what you could think going from the poster this isn't an adult take off of Flashdance or a film starring Michelle Maren.

To be honest there aren't much to recap about the film story line since this is pretty straightforward, a group of schoolgirls compete for the Flash Night Queen title who goes you could guess to the one who will have the better sex performances. The winner won a sex session with the King.

This is without a doubt the weakest of the three Erica Haven's films (First Time at Cherry High being the best one) and the lack of star power in the cast doesn't help, I have nothing again Tanya Lawson but I wouldn't pick her to lead a film. In fact the stars are in the male cast but except for George Payne none of them have an important role.

As you can see on the capture above Alexis X have never looked better that she did in this film, why she didn't get the lead is hard to understand, so at least this is a positive. Also if you are a fan of Tanya Lawson you will be happy since the last quarter of the film belongs to her (but the sex is really average if you ask me).
Nothing to recommend here since it's very below average, but if you want to see by yourself you can get the film on VOD from Hot Movies, go for a rent at least it won't be too costly for you.
Posted by Jimmy at 11:26 PM