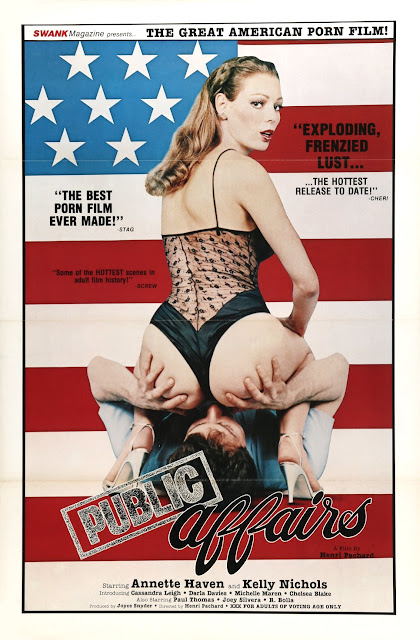 Usually I wait until the end but not this time... this Henri Pachard's production is essential and a must own in any adult film collection.


Nicholas Stern is a Congressman running for the Senate and his chances to win are pretty high as his platform is based on cleaning New York smut (a mayor did it later and turned the heart of the city as a big Disney World, but this is another story) and a pro-women agenda.


But as we all know the most a politician is against a thing higher the chances that he has something to hide (no need to talk about the anti-gay politicians who were in fact closet homosexuals) and Nicholas Stern isn't an exception. We see this fast by the way he abuse and use his aide sexually. But there are something even worse, he is bought by foreigners who in return get from him a law to make it tougher, to not say impossible, to prevent foreigners to buy American land.
While he is on his campaign run Stern announce his future wedding with a high society woman named Nannette Collier wich would be a major error.

There aren't one thing more dangerous than a woman with a broken heart and this is what that does. Indeed Jodi the woman in charge of preserving Stern's speech is in love with him and she immediately goes to talk with a journalist following the campaign trail about the land deal. But she won't have the time to talk much...

The journalist works on the land secret deal and she finally get a complete dossier and when she is ready to go on the news with the scandal a surprise is waiting... according to her producer this isn't worthy of being on TV (nothing new under the sun), she publish it in a newspaper with zero effects on the campaign.

What interest the news is a good old sex scandal and Jodi has what's needed to create one since she has a tape in her hands that she gives to Elvira Lawrence the journalist. But Tommy Corona (Stern's campaign organizer) discovers this and he goes at Elvira's apartment to steal the tape. Yep, when things go bad they go bad...

It looks like nothing will prevent Stern to win his seat in the Senate, but nothing is over yet and Marybeth one of his old flame will be the key to his downfall.

Indeed something happens during the meeting between Marybeth and Stern, an event who will be more than enough to show Stern's hypocrisy and destroy all his chances to win.

Like I said in my opening this is essential and one of the best movie directed by Henri Pachard (and that says a lot considering that he had done many good films). The story is super interesting and the subject is always relevant. Paul Thomas is great in the politician role as is Annette Heinz in the best role of her career.

If you want it you're in luck since Vinegar Syndrome just released the film this month on blue-ray, so the old Caballero DVD isn't relevant anymore and as usual the disc come with some very good extras.

Direct link to Vinegar Syndrome store
Posted by Jimmy at 2:53 AM