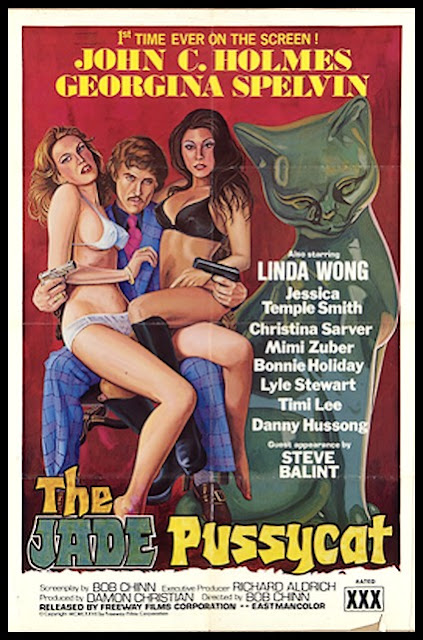 After licensing the character for one movie Bob Chinn is back at the wheel for this film and what a comeback it is.

A man get down from a boat with a sport bag, the content happens to be the Jade Pussycat that he stole in a Japanese museum. He works with a Chinese woman and the jade statue worth a fortune. When they get back together they celebrate the heist but there is one problem for Paul... he is the victim of a double cross.

At the conclusion of this betrayal we move to Johnny Wadd's office where he receive a visit from Jenny who is worried about her brother disappearance. They talk a while and she gave an envelope to Wadd with a letter and a key, so Wadd is in for another case.

Now that they have the statue in their hands it's time for Jasmine and Frankie to go meet Mueller, a German, who want to buy the Jade Pussycat. Again there is a problem... the statue is a fake! Looks like Paul wasn't that clueless since he hide the real one before meeting Jasmine. Mueller smells a double cross but he gives them a chance to retrieved the real pussycat.

Wadd starts his investigation going at the hotel where Paul was leaving, after quizzing the clerk he got the possessions he left in his room before disappearing and he is even able to rent the same room. While he goes through the things in the envelope there is a knock on the door from Sharon who a business partner with Paul.

Back to the Chinese gang, Paul isn't dead yet and they try to get the location of the key from him. They don't get much of him before he overdosed on the truth serum, but Jasmine thinks she knows where he sent the key... his ex-girlfriend. So she send Tang to pay her a visit and it's good thing VCA didn't released this film or we would have a cut version on DVD.

Wadd and Sharon enter in the apartment and after a cool scene they learn from Frankie that Jasmine is the one behind all this. So he goes at her place and find Paul's corpse, but he doesn't have the time to search more since Jasmine surprise him. Is it the end for Wadd? Of course not...

With Jasmine neutralized the case is almost, but there is always a mystery. The key and it's Wadd's secretary who decode the letters written on it. So after thanking her Johnny goes at the place to locate the locker for the key to get what is in it.

At this point this is the best film in the series, the investigation is one surprise after another and is incredibly enjoyable, in fact it's the first one who could have been a mainstream crime film if there was no sex. The acting is top notch (except for Steve Balint who overact a lot and I really mean it), there is no fighting but the "who will betray who" moments make it for the lack of them.

Even better, for once we have a good quality release. Not as good as Tapestry of Passion but it sure looks better than all the previous entries I have watched before.
Posted by Jimmy at 1:47 AM