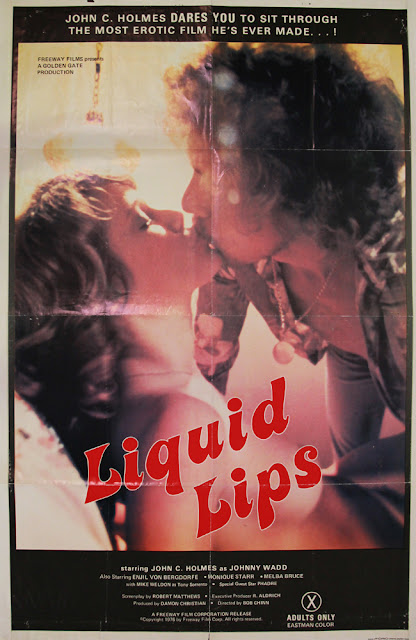 Today's installment is the direct sequel to Tell Them Johnny Wadd is Here, in fact initially they were supposed to be a single high budget production titled White Gold.

After stopping the big heroin shipment from Mexico Wadd is back at San Francisco and have a meeting with  Bill Sherman the head of the Narcotics Bureau.

At the meeting Sherman asks Wadd to works as a decoy to bust the major criminal organization who would have been the recipient of the mexican drugs. Wadd agrees and he will work with another agent on the case. While waiting to meet the agent Johnny goes to a club owned by Augre Valentine one of the criminal gang member... little that he knows Frankie, the other half of the duo who was at Mexico, recognized him and mentions it to Valentine.

Wadd and the agent have a discussion in which she tells him that Sam Kelly wasn't the only agent on the case. While Kelly was working the mexican side two others were working the american side, but they were both captured by the criminal gang. The first was killed off screen and the second one is interrogated to get informations about Wadd, he is dispatched after but at least he will get something out of it.

Since the organization wants to know if Wadd is legit or not they send a masseuse to his motel room to find more about his motivations.

Later that day Charlee Hammond (the agent) goes at Tony Sorrento's office to find the evidence that he was indeed the recipient of the mexican shipment. It doesn't turn as expected when she is caught by Wanda so she will tell her that she wants to switch side.

After her attempt to convince Wanda she is caught again and the organization call Wadd to tell him to bring the drug. They worked a trade, the heroin in exchange of 100,000$ and Charlee Hammond. They agree and Johnny goes with Frankie to get the second half of the drug. Of course there are no second half and a fight between Frankie and Wadd happen, while Hammond beat the rest of the organization inside (too bad it happened off screen since that would have been much better to see this one).

This one without being as good than Tell Them Johnny Wadd is Here is a fine conclusion to the story. Is only problems are that it isn't as action filled as the first one was and some of the scenes are just fillers (the one between John Holmes and Melba Bruce sure felt like it). To be honest I would have prefer to see the original project as it was planned, but at least contrary to those who watched it theatrically we can watch the parts in the right order now.

The poster image I use on top of this recap came from The Westgate Gallery website... they have quite a database of original film posters if you are a collector you should take a look.

https://westgategallery.com/
Posted by Jimmy at 1:11 AM