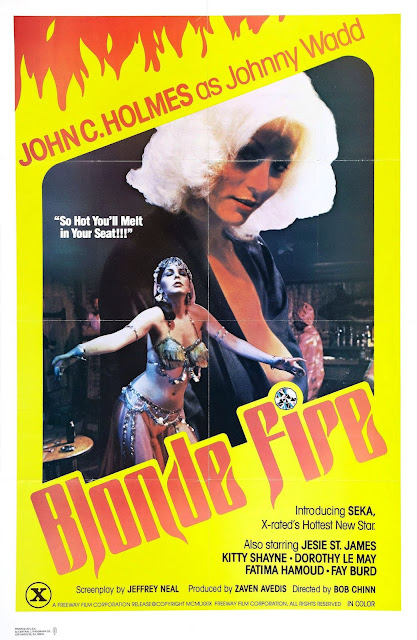 In this new chapter Wadd goes international, indeed he was hired to buy and bring back the Blonde Fire diamond from South Africa... but don't get that excited they didn't shoot the film there.

After his landing Wadd goes directly at the DeBeers company to pick the diamond. He can't pick it immediately, but he left the cash suitcase in exchange for a delivery receipt and goes to the hotel room who was rented for him under a false identity by the company.


It's time for a shower and while he takes it a thief enters his room to search for the diamond. She is caught and chained on the bed by Wadd for an interrogation... of course you know where it'll lead.

All of sudden there is a knock on the door so Wadd must hide the thief in another room to go check on the door who it is. Nothing to worry about, this is Lorna the secretary from  DeBeers he invited before leaving their office.

After he is done with Lorna it's time for him to go meet Vickey Caruthers, the chief of security of DeBeers, at her apartment... yeah this is a busy evening for Johnny.

But wait this isn't over yet... next he goes at a club to learn more about the diamond thief and considering this is supposed to be South Africa this club sure feel out of place. So he sit at the bar and surprise he is drugged and wake up in a strange room (I guess he was stolen, this is not very clear) and he his helped by the club Belly Dancer.

Following this very busy night Wadd goes at Debeers office to pick the diamond and he leaves. But of course this won't be that easy, since everybody wanted the diamond a big game of I stole you and you stole me begins.

Of course it ends fine and enter Seka as the woman waiting for Wadd at San Franciso.

Honestly even if this film casting was pretty good it wasn't that great. The story is boring and it feels more like a "John Holmes wants to fuck new women so let's do a film" production. After the last three films this was a deception and it doesn't help that the DVD isn't that good looking.

If you need to complete the series get it, but there aren't much to recommend.
Posted by Jimmy at 11:10 PM