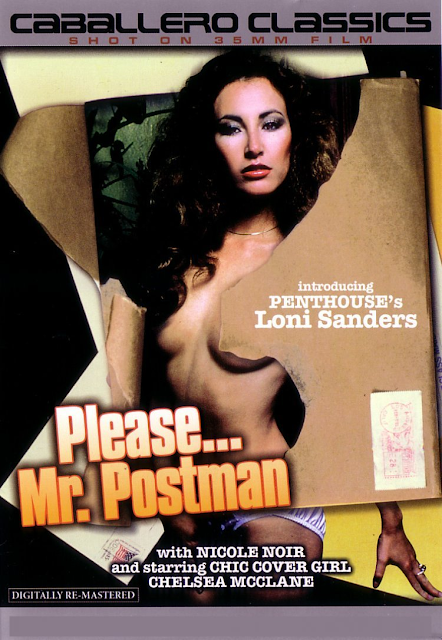 Today a lesser known film from the Lewis Brothers... who are of course fictional brothers. The film this time is directed by Ken Gibb (he was certainly the DP too) and produce by Elliot Lewis.

The film isn't complicated story wise since we follow two postal workers (Loni Sanders and Jesse Adams) doing their mail delivery road. This is use as a way to link everything together.

As I said the mail delivered is what is linking together what could have been a series of loops but they aren't, so we have a lot of non-related scenes for most of the film running time.

First Suzanne (Tigr) get a film delivered at her home, so she and her friend Elenore (Lynx Canon) decide to watch it together since it's a vacation home film.

Surprise it isn't the innocent family film but a loop!!!

Next it's Ralph (Richard Pacheco) who gets a package, but this time the delivery is part of the story since Ralph is sure that Barbara and Nina Franks his favorite actress are one and the same. So Barbara will model and more for Ralph and in exchange he will continue her mail road for the day.

After that interlude it's direction sorority house where two students (Sonya Summers and Misty Regan) got a mysterious package filled with vibrators, condoms and nude men magazines who was sent to them by a trio of a shy guys who will be rewarded in not too long.

Time for another delivery, this time for Betty and just in time to replace her husband who neglect her since he is stuck to his TVs (yes plurals... he is one of those guys who watch many shows at the same time). Obviously he will join her after a while...

Finally we have the last delivery who is a swingers magazine that Stanley (Milton Ingley) will use to contact two women who put add in it.

I have no idea why this film isn't more known since this is quite enjoyable and the chemistry between the actors is great (seriously Richard Pacheco and Loni Sanders work well together just like Tigr and Lynx Canon do).

Sure there are a couple of missed opportunities but most of the mail stories are funny to watch and original... sure worth a watch in my book.
Posted by Jimmy at 2:21 AM