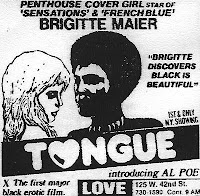 One of the few adult blacksploitation films I own and it had something in common with Lialeh (the only other one that I own) : a good soundtrack. A chance since it is certainly not a memorable film for anything. I  had particularly a great difficulty to believe that this film was made in 1976, seriously Brigitte Maier is the star of Sensations (one of the best adult production ever made) in 1975 and the following year appears in a production with zero budget... Not to mention that her performance is more than ordinary and without much enthusiasm. Which is a shame as she appears in at least the three quarters of this film. In fact the poor visual quality of the film didn't help, most of the time we can discern nothing but the color of the participants. I had great difficulty to keep my interest in the history or the action while I watched the film. The synopsis seemed interesting at first sight, but the lack of budget is really too obvious. Only at the end we can see that the director had some talent with the scene where Quasi surprises his wife and her lover on the beach.

If anyone has more information about the production of this film (particularly the production date and the real identity of the director behind the name KB) Please feel free to use the comment section.