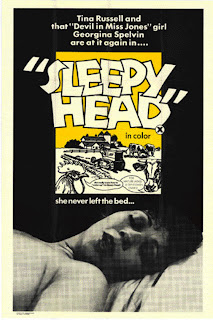 First hardcore movie directed by Joe Sarno which I must confess is one of my favorite director with Radley Metzger all genre mingled.  So it is not easy to write that I have not really appreciated the movie. It starts well with the presentation of Bernice (Georgina Spelvin) who is a writer with a sexual life problem (in fact she doesn't had one) which occasionally meets a mysterious personage (Davey Jones) in the park near where she lives. Moreover Bernice shares her apartment with her sister (Tina Russell) who is a religious fanatic. The elements are all present for another successful Sarno's movie. But everything deteriorates rapidly with the introduction of Judith Hamilton in this film, from this moment one has the impression that the whole film is about her. Judith Hamilton is not, to be honest, a great actress (not to mention that she does absolutely nothing to me sexually speaking) and with all the talent in this distribution it is hard to understand. Without forgetting the precence of an endless orgy at the end of the movie (it lasts more than 30 minutes) who is very boring, even though Tina Russell is in it. It seems that Joe Sarno was not interest more than necessary when making this film, at least that's what I perceive. A disappointing first try, but Sarno will do better later with A Touch of Genie and The Trouble with Young Stuff among others ...

This film is available individually or in a box set with 3 other Tina Russell's films (A Time to Love that I reviewed recently is included in it also) on the website of Video-X-Pix.
Posted by Jimmy at 5:35 PM