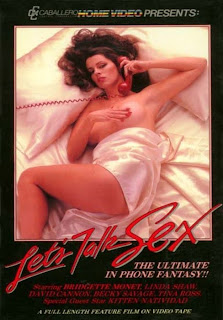 The film begins rather well with a nurse (Bridgette Monet) returning from her day's work through an area that can easily be described as somewhat recommendable. After a few encounters with drunks and shady characters (which includes Paul Vatelli the director of this movie), she finally reach her home safely. Of course this does not last long since an intruder wait for her in the shadows and who is the intruder? David Cannon which of course was not really difficult to guess since they were a couple at that time and they turned exclusively together (to the best of my knowledge they are still married). So it seems we are gone for a crime thriller ride wich I would have liked, but after this scene we see that Cannon is on the phone with an erotic call service. This gives us an uneven mix of scenes using the customers calling the hotline to connect them. Not that the film is bad either, but after a good introduction like that I was sure disappointed. This film is one of the adult film in which appear Kitten Natividad (Beneath the Valley of the Ultra-Vixens) in a very average scene with Becky Savage. Equally interesting is the fact that this is the first film of Laurien Wilde (she is great in Alexandra a movie that I strongly recommend) who had died way too early the following year in an automobile accident. Also this is one of the first film of Julia Parton who has been for several years the reason why I bought High Society every month since she was the magazine editor after Gloria Leonard. This film is  also one of the first Tom Biron's movie and it's amazing how he may seem young, it looks like he is 16 years old and, of course, he plays a young teenager who use the telephone service to help him to lose his virginity with his girlfriend (Melanie Scott). This film is not the greatest ever made, but for the price it is an easy recommendation.

This film is available on the website of Excalibur Films and at Adult DVD Marketplace for less than $10.
Posted by Jimmy at 9:12 PM