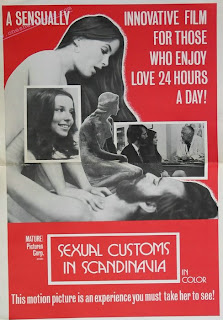 With this film we are really in the beginnings of the adult cinema. So the good old method of the doctor / narrator is used (here this is a psychologist) to demonstrate the moral values and the good taste of the film. To my amazement this is the case, this film discusses the issue seriously, is instructive and certainly less boring than The Language of Love (a swedish film included in a british boxset of Christina Lindberg's movies). Of course the whole aspect "this film is Scandinavian" is entirely false since the doctor that we see frequently helping the clients referred by the psychologist is Daniel Harin (he also plays a doctor in The Debauchers) and among those clients we can recognize Tina Russell, Jean Parker, Jason Russell and Shaun Costello hiding behind aliases sounding vaguely Scandinavian (Judy Gringer, Jan Rinkberg, Sven Stroebye and Neil Almebor). The film is built around three segments representing three cases of clients with sexual dysfunctions who consulted the psychologist (Ingrid Petersen, probably an alias but I have no idea of who she is) and the solution of their problems. The fourth and final segments of the film is different because it is the visual representation of some sexual positions demonstrated by a couple (Dolly Sharp and Jamie Gillis). It is also interesting to note that Sidney Knight the director of this movie will direct The Debauchers and The Morning After (two films that I enjoy and  highly recommend) after this pseudo-documentary. Strangely, despite the obvious talent of Knight as a director those two movies will be his lasts (unless we count Rings of Passion  for which he was the editor).

This film is available as a stand alone dvd or in a four movies set (I already mentioned this one previously and it's the option I recommend) through the Video-X-Pix website. The DVD also contains the trailers of Misbeavin' which seems interesting and Hot Honey a Bill Lustig's film I appreciate (I will probably talk more about this one later this year).
Posted by Jimmy at 1:12 PM