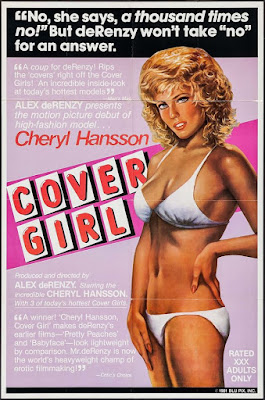 Usually for me a film by Alex De Renzy is either extraordinary or poor. I like his real movies like Pretty Peaches, Babyface or Femmes de Sade, but I'm not a big fan of his loop carrier like Dirty Girls and Wild Things. The good news, at least for me is that Cheryl Hansson is a movie. From the poster you might think it's a film about the fashion world, but it's not really the case. It is more a detective story about the murder of a model's agent. Another thing Cherryl Hansson is not really the main personage of this film, this title belongs to Nicole Black, who plays one of the top models and steals the show at each of her appearances on the screen. The crime is discover when Cheryl Hansson goes at the agent office to sign a contract and decides to use her charms to convince him to sign her, but what she ignores is that the agent is dead and that she interacts with her murderer. She is the only one who can identify the murderer, a difficult task since she has never seen his face but only a tattoo he wears on the top of his thigh. She will therefore assist the inspector Horn (Joey Silvera) in its investigation. As the film revolves around the fashion world we get many photo shooting session scenes and training sceances at the gym. I really enjoyed the scenes in the gym since Herschel Savage plays the handyman of the place and plays the role in a rather amusing way. Without mentionning that the best scene of the film takes place at this location when Nicole Black catch Herschel Savage spying on her while she is in the bath. Without being a great detective story the film is still enjoyable to listen to because of the "watching a movie" feeling we got.  Like all the Alex De Renzy 's films the cast is not credited (except Cheryl Hansson), but many familiar faces made their appearance in the film. In addition to those already mentioned, you will easily recognize John Leslie, Paul Thomas, Michael Morrison, Kathy Harcourt, Phaery Burd, Misty Regan, Starr Wood and the murderer that I obviously did not name.

Unfortunately like many other titles distributed by Essex Video this movie is not available on dvd. I really wonder who owns their catalog which includes many good film like Baby Rosemary, The Joy of Letting Go, Scandalous Simone or Exposed.
Posted by Jimmy at 6:24 AM