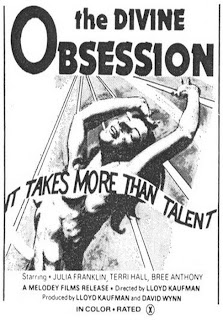 This film is the last production for adults directed by Lloyd Kaufman. The name sounds probably familliar to you since he is the president and co-owner of Troma Studios. Like many other famous directors Kauffman  worked in the flourishing New York adult industry during the seventies, he directed two other films (The New Comers and Sweet & Sour) in addition to this, he was producer and He was also a director of photography. This film is rather interesting and the best way to describe it is that it's about a burlesque star,  who reminds herself the events of her life since her arrival at New York during her last performance. The film  mood constantly alternates between comedy and drama, we must admit that the life of our heroine (April Sumers) has not been easy. She was a loops actress, an erotic photography model,  a  first rate pornographic film star,  a luxury call girl, a street prostitute and a burlesque dancer. There are many moments when you find yourself laughing while watching, which is an evident quality proof of this production (another is to not see the 90 minutes of the film pass). It is also interesting to note the subtle messages that Kauffman passes on the industry (I know that subtle is not really the first word that comes to mind when one thinks of Lloyd Kaufman). A film that is quite difficult to find, but worth the efforts to find it. You will find several familiar faces like Teri Hall, Bree Anthony, Alan Marlowe, Levi Richards and Eric Edwards among others in this film. If you are looking for some odd moment this film will also meet your expectations with an enema sceances with cream and a new and messy way to use the pastries.

As mentioned earlier this film is rather rare and therefore not available on dvd, it was by cons released on VHS by Alpha Blue Archives some years ago. I am also looking for Sweet & Sour and The New Comers, the two other films directed by Kauffman so if someone could directed me in the right direction it would be greatly appreciated.
Posted by Jimmy at 9:00 PM