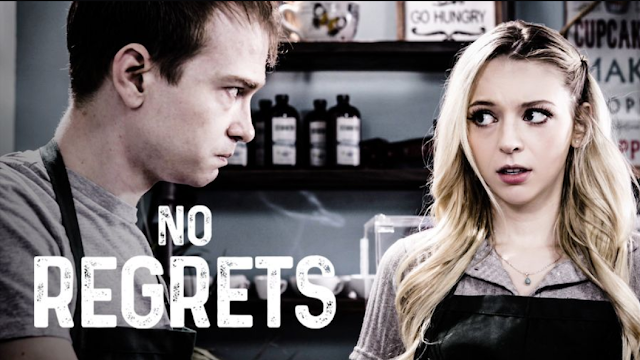 Chrissy (Lily Larimar) and her boyfriend (Alex Jett) work together in a coffee shop as baristas, for some reasons Josh's head doesn't seem to be at work. Chrissy talks with him and he finally admits what is troubling him... he slept with another girl.

Unsurprisingly she doesn't take the news too well, but Josh goes in blame mode and says that it is her fault since she is too uptight.

She tells him that she can change but Josh highly doubt it... she'll prove him that he is wrong right there behind the counter.

To be honest this isn't one of the best Pure Taboo scene, not that it wasn't enjoyable but it could have been made by any label and it wouldn't have made a difference since there was nothing taboo here... Sex on the job sure isn't, this is what storage room and toilet are for. Lily Larimar is a cute blond with long hair I have never seen before and I'm always happy to see someone new. I also like that a client (Shawn Alff) is there and that he is completely oblivious about what is happening for a long time.

Not something essential but worth a watch on the streaming channel... it isn't like the price change whatever you watch something or not anyway.