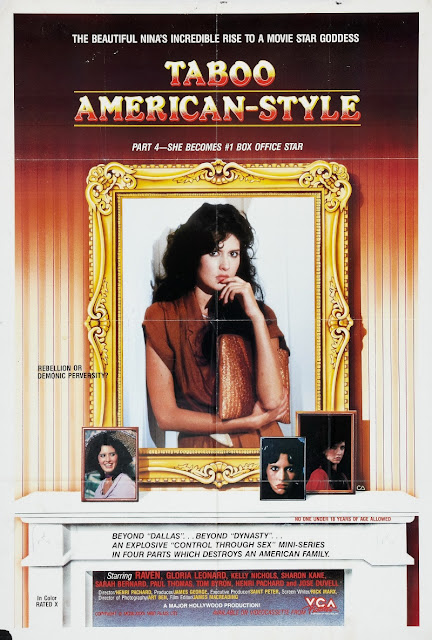 All good things must come to an end and this is where we are with the conclusion of the four parts series (in fact more were supposed to be made but sadly it wasn't mean to be). Some time pass since the beginning of Nina acting career, not a great one to be honest since the movie she did was a failure and that put her father in big financial trouble. But there are worse, remember the relation between Tom and his mother? That doesn't turned great either since Tom became a drunk due to his guilt...

Of course Nina didn't gave up on her acting career and one day while she does a party at her family house the perfect occasion come. Remember the trick she did to control her father, she'll do the same with her last movie producer to get a bigger role by making him see his wife and the main actress of his next film in bed. Yep she did it again...

Next step is to get an agent and she wants the best in the business, Sid Holtzman. For good reasons he isn't interested at all, but we already know that Nina always gets what she wants and she will use Clete Chinaski to seduce Holtzman's wife in a voyeur game.

She'll continue to get bad critics but one day a big Hollywood movie producer calls her agent to tell him that he wants her right now in Tinseltown. She leaves her father for good, breaks his heart like he would have been nothing for her and make it big in Hollywood.

All thing said this is a great series who got a lot of awards for good reasons the year it was made. It really feels like a movie and not a single scene in that four hours plus film is just there to fill the running  time. Raven easily gave the best performance of her career playing what is mostly an awful unlikable character, Paul Thomas and Gloria Leonard were also very good at showing the downfall of their character and, of course, Jose Duval was excellent in what was a non sex role (I don't really count masturbation as sex) this isn't for nothing if he won a best supporting actor award for his role.

I would say that this film was the last production of Henri Pachard where he had the chance to work with a major budget and a very good script. Sadly no follow up were ever made, I would have loved so much to see Nina hitting rock bottom and get her just reward for everything she did to everyone around her.

I really hope that someday someone will give to this series the respect it deserve... firstly by remastering the negative and secondly by releasing it as it was supposed to be release: a single feature and not a four parts series.

Like I said already three times... just rent the series and don't buy the four DVDs as that kind of crappy who gave a bad name to the genre doesn't worth rewarding some label with money.