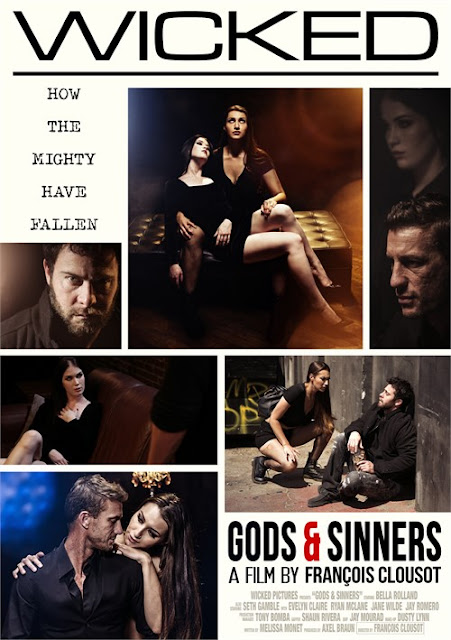 Most recent release by Wicked Pictures and this time it's a movie who is more than what I call a collection of scenes like Foxy Ladies or Trailer Park Girls, to name a few, were. So let see if the old Wicked is back in the game.

Tiberius is a man at the end of road, living in the streets with the help of his alcohol bottles to forget a past he doesn't want to remember. One day a woman named Octavia (Bella Rolland) after talking with him bring Tiberius at her apartment to help him cleaning himself.

Quickly we discover that everything is more complicated than just a down on his luck man as Greek Gods are involved in the action, Gods who wants Tiberius to remember his past. So without giving too much the Gods will do everything to bring back Tiberius' memory throughout the story.

Nothing and no one is really what you thought they were, in fact you are in for a surprise when you'll find who Tiberius and Octavia are and the importance of their characters for the balance of the universe.

This is a great comeback at Wicked for Francois Clousot after at least an absence of ten years, obviously he doesn't work with the same type of budget than back in those days but his experience behind the camera make the film looking better than its cost. Of course I go with the premises that it's a medium budget production shot at one location with a good share of the budget going for the cast. Talking of the cast you can't get better than this... we get Seth Gamble, the best actor of his generation, to lead the film who is great as he always is in every film projects he is in, we get Bella Rolland in her first real acting role (she is a much better actress that she thinks she is) and established stars like Evelyn Claire, Jane Wilde and Ryan McLane in supporting but important parts.

The camera works is great which is perfect since a bad job on a film with few locations would ruins everything by making the result look cheap. The sex is nothing to complain about and we even get Bella Rolland in half of them so if you are a fan of this Amazon Goddess you know what film you must watch soon.

The film without being perfect is a step in the good direction for the company and I sure hope it's the first of many narrative films coming from them in the future... there is already a film noir starring Evelyn Claire and Charles Dera coming at the end of 2021 that looks fucking promising judging from the trailer.

The film is certainly worthy of a positive recommendation and you can watch it on the Wicked streaming service or, if you aren't a member, you can purchase the movie on video on demand at your favorite store online.