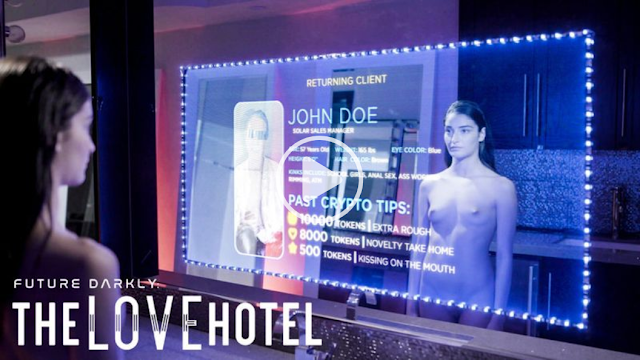 A woman wake up from a bath of white liquid, in fact she is the sexbot Unit 30562 and it's a day in her life work. She selects the client via a computer screen who gives the name and request of the client, after she accept one she changes to conform to the customer's wishes.

We see her go with two different clients, one who wants an all-anal time and one who wants some rough sex (to be honest this isn't really that rough).

After she ends with her second client someone knock at the door and she doesn't really know how to react since she didn't get any information from the computer. But she is intrigued since this is something that she has never seen before... a woman.

After opening the door she isn't sure of what to do since she got no instruction but she follows the usual program, taking a token and do what the client wants... obviously it's lesbian sex time. The client leads and guide Unit 30562 on how girl girl sex work. Sadly it will end badly for both of them.

As usual you can get it via the Adult Time streaming service or on DVD/VOD paired with Eyes in the Sky.