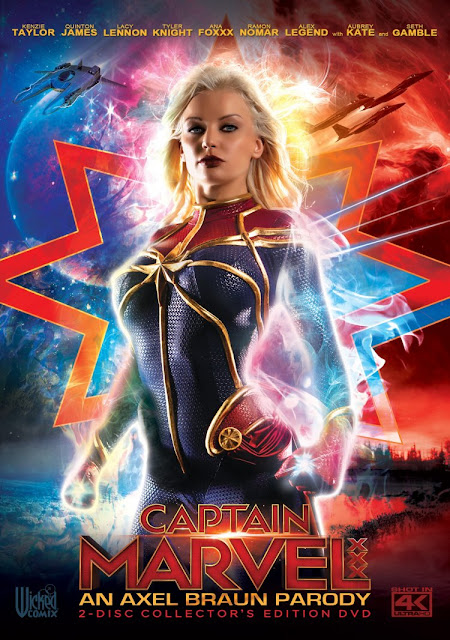 First thing first, don't ask me if it's like the movie since I don't have the slightest clue since I have never watched a Disney Marvel superheros film because I can't stand that type of cinema.


So in this film Captain Marvel is training for a mission on the Skrulls home planet, but she's captured by two Skrulls but she escapes after draining them of their force.


She find an escape pod and use it to left the planet but there is a problem she can't find the way to fly it and crash on earth. At the crash site she meet Nick Fury and after contacting her home planet she learns that she must enter in contact with Maria Rambeau.
When she arrives there she meet with her daughter, Monica, who tells her that Maria is long dead. They discuss with each others until a small problem happen... Monica is Captain Marvel!! So they start fighting but of course they will resolve the situation via another way since it's an adult film.


Carol Danvers win the competition and she will be the one and only Captain Marvel, but there aren't much time to celebrate since Monica and Nick Fury are "snapped away". So she must use the Superman trick to go back in time where she fall on Deadpool and Jane Grey. After a seance of exercise between each other she get all her power and memory.

The end... to be continued in the sequel! At least this is what Captain Marvel told us and why she would be lying to us.

Usually I'm not a big fan of modern adult cinema, but this one was an exception. It was quite funny (don't forget it's a parody to begin with) and you see that a lot of care and love was put in this production. The costumes are perfect, the CGI does the job (and are not overused like it so often the case in the Hollywood idea of a superhero movie) and Kenzie Taylor was perfectly casted as Captain Marvel (she certainly look more like the character than Brie Larson).

Sure worth a renting or a VOD purchase and you'll find that film easily at the usual stores like HotMovies, AEBN or Gamelink to name a few.