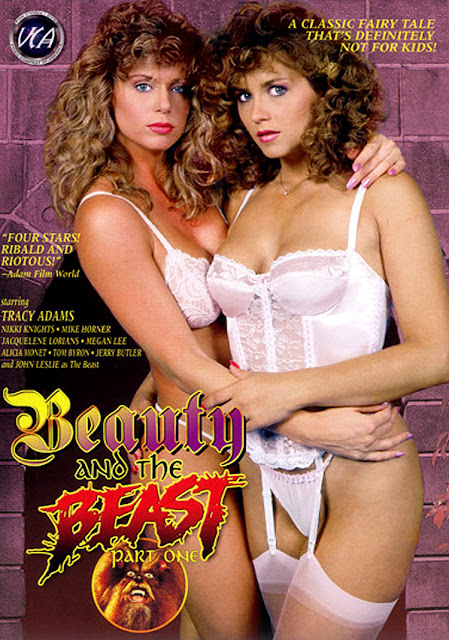 Paul Thomas' version of the classic french tale La Belle et la bête, you certainly know the story since it was done so many times on the big screen but here we go...

Lyle Notapenny (Mike Horner) a poor peasant with two daughters (Tracey Adams and Nikki Knight) while doing his usual travel trying to sell products to support his family ask to stay the night at a nobleman house. The nobleman accept to give him shelter for the night and after a busy evening he is ready to go the morning after. On his way he picks a rose since his daughter Belle asked him to bring her one.

Without realizing it he did a major offense to his previous night by taking the rose. Indeed the beast accuse Lyle of theft and threatens to throw him in his dungeon unless he brings his daughter to meet him.

Later while Belle is at his home the beast confess his love for her and, since it isn't a Disney film, ask her to make love and marry him ... and offer that she refuses at first, but the day after she come back since she feels that he is beautiful inside. Indeed he is as she discovers after their love session... see the beast was victim of a curse that only the love of a young girl could remove.

It's a fairy tale so you know the end...

Surprisingly this is an excellent adaptation of the tale that certainly make more sense than the Disney version did. The humor added to the story by Paul Thomas is more than welcome and Tracey Adams shows once again that she was more worthy of a mainstream career than Ginger Lynn or Traci Lords, but sadly it didn't happen.

Jacqueline Lorians, who almost steal the show, and Nikki Knight do also a good job with their supporting role... on the other hand Jerry Butler didn't have much to do in what is pretty much only a sex part.

Of course I recommend this one that I have own since the VHS days (a french dubbed version since my english wasn't good enough to follow a story thirty years ago) and get back again on DVD later. Since it was a DTV the fact that a tape master was used for the VCA DVD doesn't make a big difference.